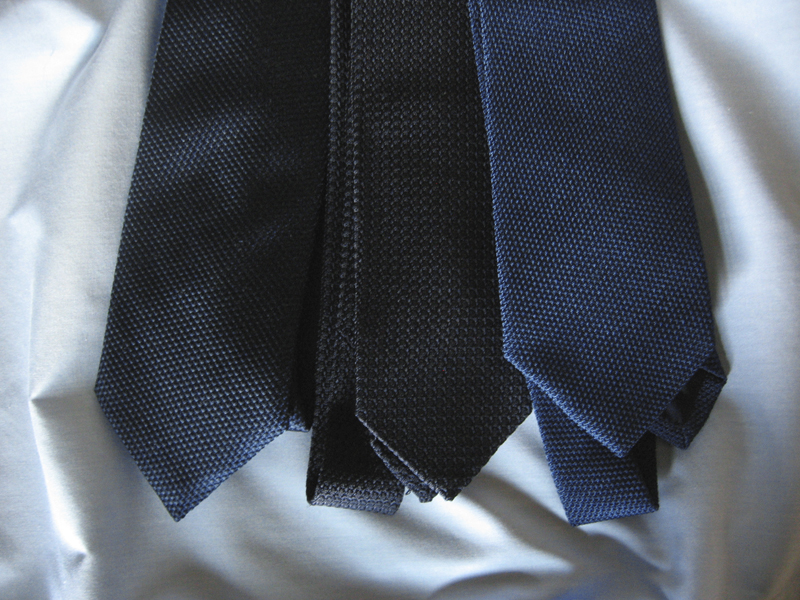 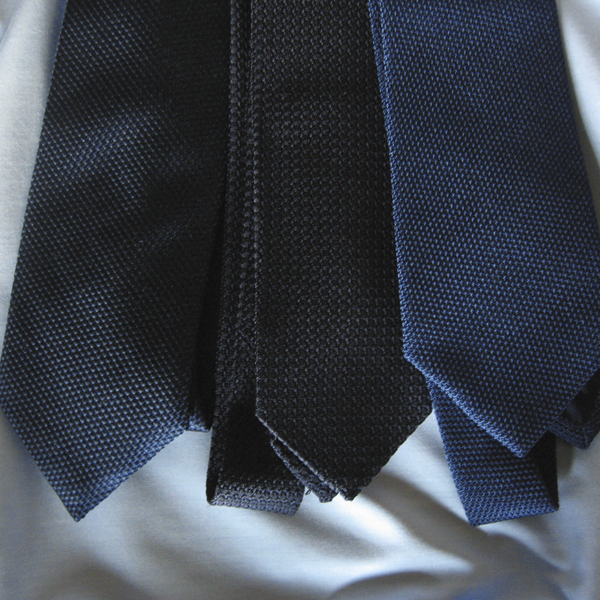 The Tie Bar recently released a line of solid-colored, textures silk neckties that vaguely resemble grenadines. These aren’t true grenadines; they just somewhat look like them from a few feet away. Curious about the quality, I contacted Greg Shugar, one of the co-founders of the company, to see if he would be interested in sending me one for review. It arrived last month and I’ve worn it a few times since.

The tie is better than what one might expect. It compares well to the mass-manufactured neckties you might find in a department store – the Perry Ellises, Tommy Hilfigers, Calvin Kleins, and the like. To be sure, I don’t think any of these brands make particularly nice ties, but I appreciate that The Tie Bar has a bit more honest pricing – $15 for such a tie, rather than $50 in a department store, regularly discounted to $35, then $25, then $20, in hopes that customers think they’re getting a steal.

Obviously, a $15 tie will have its limitations. The grenafaux they sent me lacks the body on a truly, well-made tie, and the fabric has a slight sheen to it. It’s a bit light and flimsy, and not particularly enjoyable to knot. On the upside, the interlining is a wool-poly blend, which isn’t as ideal as a pure wool interlining, but at least it dimples better than a tie lined with polyester, and the wrinkles fall out a bit more easily at the end of the day.

It’s become a bit of a cliché, but I strongly believe in the “buy less, buy better” philosophy. Better one tie from EG Cappelli than three from Brooks Brothers, and better one from Brooks Brothers than three from Alfani. Men don’t need as much clothing as they think do, and if they traded many of their purchases for nicer things, I think they’d be left more satisfied. The most affordable grenadines I know of are from Chipp2 ($47.50) and The Knottery ($55). After that, there’s Kent Wang ($75), Sam Hober ($80), J Press ($90), Drake’s, Vanda, and EG Cappelli (~$120). I would feel more comfortable recommending any of these – or even a non-grenadine from a mid-tier maker – over The Tie Bar.

At the same time, I remember there was once a point in my life when I couldn’t afford a $50 necktie. It wasn’t that I was being stingy; it’s just that all my money went to rent, food, and my education. For people who on a truly tight budget, but still wish to dress well, I think The Tie Bar’s grenafux ties are an option. They’re not the best ties in the world, but I couldn’t say someone would look terrible for wearing one. As you can see above, it does indeed kind of look like a grenadine, and The Thrifty Gent wore one a few weeks ago and still looked pretty sharp. Plus, if you needed to skimp on your wardrobe, it would better to cut out $50 from your necktie wardrobe than, say, footwear. There, $50 could mean the difference between full-grain leather shoes and corrected grain, the latter of which you should never buy.

My standard recommendation for affordable neckties remains the same: Land’s End and Brooks Brothers once they hit their sales. They usually discount stuff to under $40 a few times a season. If you can’t afford those, try thrift stores or eBay. If you don’t have the time, however, then consider The Tie Bar’s grenafaux. I still believe people should buy the best they can afford – as they’ll be happier in the long run – but the same can be said about buying what you can afford, and not spending outside of your means.