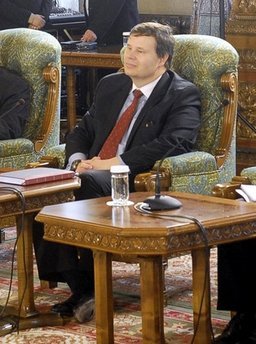 If you ever needed proof that dressing is social and cultural, not absolute, or that you dress for those around you, not simply for yourself… it’s here.

A reader named Jonathan sent me a fascinating AP story about Jeffrey Franks, the International Monetary Fund’s envoy to Romania. When the IMF helps bail out a struggling nation, they send an economics envoy like Franks to guide the austerity plans that they hope will bring the country back from the brink. Franks, with an undergraduate degree from Princeton, a master’s from Oxford and a PhD from Harvard is one such envoy.

Romanians, it seems, are upset not just by those unpleasant austerity measures, but also by something smaller – literally smaller. Specifically, a hole in Franks’ shoe. The hole is visible in the picture above, and the AP says this has become a major point of contention in Romania – along with Franks’ black suit and cheap digital watch. I don’t have to outline the ironies here – a nation, chafing under outsider-imposed austerity measures, mocks the austerity of the outsider.

This kind of sartorial austerity is hardly anything new, either. Witness the patched shoes of Prince Charles, for example. In the context of great wealth, a disregard of outward signs of wealth can, contradictorily, be a powerful symbol of wealth. This is particularly true in places which combine the Protestant ethic with deep-rooted money, like the Northeast United States, or England. Nantucket reds, the famous faded red trousers of moneyed WASP vacationers, are another example: they could be replaced, but instead the fading demonstrates the leisure the wearer has enjoyed.

This isn’t even the first political shoe-hole controversy. In the 1950s, presidential candidate Adlai Stevenson caused a furor when a photograph was taken of the hole in the sole of his shoe. Stevenson came from the patrician Northeastern tradition that suggested that the greatest demonstration of class wasn’t to wear the finest clothes, but to wear your clothes until they were unwearable. Michael Bloomberg, the billionaire mayor of New York, only has two pairs of work shoes, and they’re both loafers.

Whether or not Franks comes from a patrician background, he’s certainly been steeped in what’s left of that world. And education at two Ivys and Oxford will do that. He may well have a touch of the contemporary version, brought over from Silicon Valley – a true technocrat has no need for clothes, his skill will do the talking.

What Franks missed, here, was that his values, whether they’re patrician, technocratic or just slovenly, aren’t shared values. He serves as a type of diplomat, and as a diplomat messaging and trans-cultural communication is part of his job. He has to understand that when he dresses, he sends a message. Given the baggage he enters every room with – “here comes the imperialist, telling us how to run our country” – he needs to be extra cognizant of how his choices will be received.

He also needs to stop wearing loafers with a business suit. That’s tacky in any country.