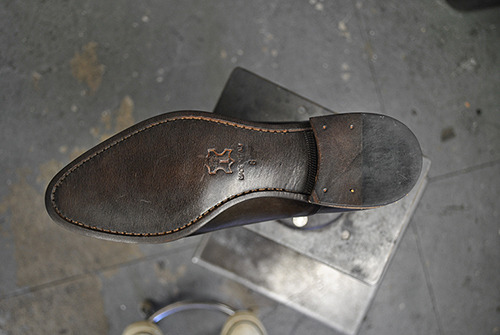 Given what shoes cost nowadays, it’s important to know whether you’re getting something of quality. Most of our readers will be familiar with the basic telltale signs – the uppers should be made from full grain leather, rather than corrected grain, and the soles should be stitched on, rather than glued.

But is that all there is to quality? To find out, we took a pair of donated shoes from one of our former advertisers, Paul Evans, and sent them to Raul Ojeda in Los Angeles. As some readers may remember, we featured Raul our special episode on shoes (back in season one of our webisode series). Raul not only repairs footwear at his shop Willie’s Shoe Service, he also makes bespoke shoes through his brand Don Ville. If anyone knows about what determines quality, it’s him. So we set him on the task of deconstructing Paul Evans’ oxfords – from bottom to top – to learn about its components.

The first step in deconstruction, of course, is to remove the heel, which Raul noted here is made from reconstituted leather. “High-end manufacturers such as Alden or Edward Green will use stacked leather heels,” Raul explains. “That means they cut individual slabs of leather, then stack them on top of each other until they get a heel. This Paul Evans heel, on the other hand, is made from fiberboard leather, which is sort of like a leather equivalent of particleboard. The heel is essentially made up of powdered leather and glue.”

What does that effectively mean? Well, for one, a stacked leather heel is easier to repair. As each layer gets damaged, a cobbler can just peel back the layers and replace them with new ones. When a fiberboard heel gets damaged, the whole thing has to be replaced. Here, Paul Evans’ heel is protected by a top piece, which helps with durability, but the part under it is solid.

Peel back the outsole and you get the mid-sole – the layer that can sometimes be found sandwiched between the outsole and the footbed. Paul Evans has a hole cut out of their mid-sole in order to make room for some foam.

“This is a design trade-off,” explains Raul. “On the one hand, their mid-sole is made from the same fiberboard material as the heel, so it’s a little more likely to break than if they went with real leather.” This could be an issue along the edges of the mid-sole, where the hole in the middle has narrowed the material.

“On the other hand, the foam adds some cushioning, which helps give the shoes some immediate comfort,” says Raul. “So it’s really a design decision on the part of the manufacturer – whether you want to trade durability for extra comfort.”

Central to a shoe’s construction is how the soles have been attached. A stitched-on sole is not only more durable (as it’s less likely to detach from the uppers than a cemented construction), it’s also easier to replace. With easy resolings, you can make your shoes last ten to twenty years with proper care.

These Paul Evans oxfords use a stitched-on method of construction called Blake stitching (which is good), although – as Raul points out to us – the outside has a fake welt. “You can see that the stitching just goes along the perimeter of this mid-sole, but it’s not attaching to anything. It’s just decorative.”

Paul Evans’ Blake construction differs from another technique known as Blake/ Rapid, both of which are commonly used in high-end Italian footwear. Whereas Blake/ Rapid constructions will have two rows of stitching – one connecting the outsole to the mid-sole, and then another connecting the mid-sole to the uppers – a Blake constructions only have one row of stitching going all the way through. “This is definitely better than having a glued on sole, but having one set of stitches isn’t as secure as having two.”

Finally, just behind the mid-sole is the footbed – the part that cradles your foot. Here, the edges of the uppers are wrapped under the footbed and the rest of the foam sits just under the forefoot. Pretty straightforward stuff.

For $350, Raul thinks these oxfords are fairly priced. The uppers are made from full grain leathers and the soles have been stitched on. That means that the top part of the shoe will look better with time, while the bottoms can be easily resoled when needed. The parts that are made from lower-quality components – the heel and mid-sole – can be replaced if they ever fail.

“You have to remember that every designer is aiming for a certain price point,” says Raul. “So when you’re working with a factory, you often have to do what’s sometimes most expedient for them in order to meet those price targets. These heels were likely prefabricated at another factory. If Paul Evans used stacked leather heels, it would add to the cost.”

Plus, he notes, the linings inside are made from pure leather. “There are lots of fancy Italian brands in this price tier who will stuff the inside of their shoes with ground-up paper. This paper sits just below a thin layer of leather and it’s absolute garbage. It’s not nearly as durable as pure leather, but it’s done as a cost-cutting measure. These Paul Evans are a little better in that they use pure leather.”

So How Can You Judge Quality?

Everyone wants a simple measure for quality, something we can easily spot at the store so we know whether something is well-made. Is a suit jacket fully canvassed? Are a pair of shoes Goodyear welted? Does something have a “made in Italy” label?

In reality, the idea of quality can be quite complicated. As Jeffery Diduch once noted in our post about how to judge quality in suits, designers need to make trade-offs in order to meet price targets. Which means, they may sacrifice one design element in order to keep another, but figuring out which elements are important can be very subjective. And as both Jeffery and Raul have shown, a lot of what determines quality is hidden “beneath the hood.” Meaning, there’s a lot going on inside a garment or shoe that we can’t easily see (or easily judge even if we saw it).

So what does that mean for us as consumers? Certainly, it’s useful to know the basic measures of quality, but it’s also good to be not be too absolute. At the end of the day, what matters is our personal experience with a brand or product. Use those basic markers for quality to figure out if you should try a new brand, but always rely on your personal experience to figure out if you should go back.

(Many, many thanks to Paul Evans for donating a pair of their shoes, and to Raul of Willie’s Shoe Service and Don Ville for donating his time)