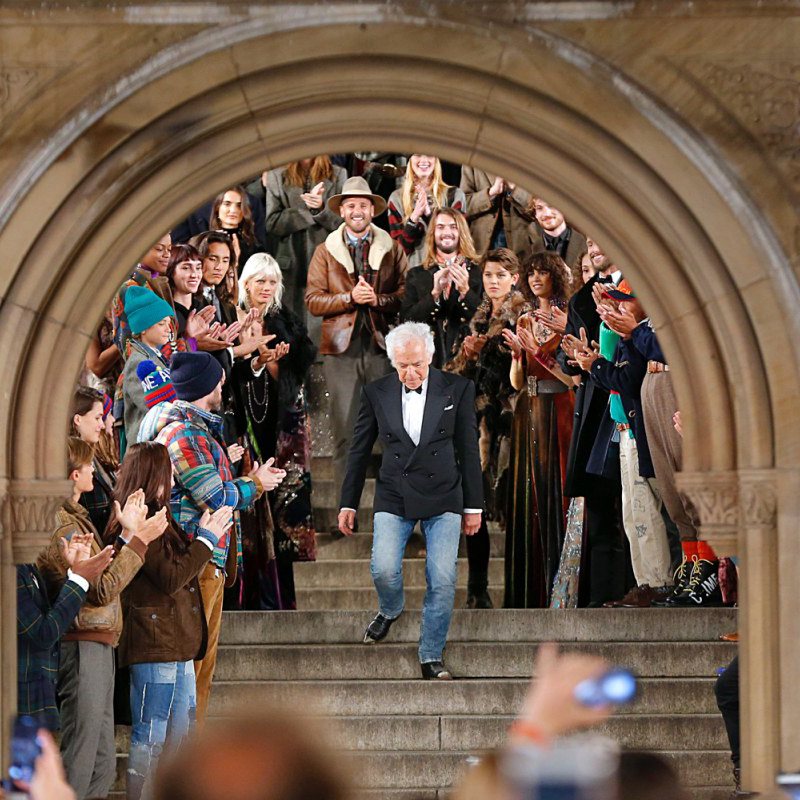 Eighty years ago, it was possible for a man to buy the right wardrobe and be assured that he’d remain well-dressed for the rest of his life (with some considerations for maintaining weight and repairing clothes, of course). Over time, the lifespan for an in-fashion wardrobe has shortened considerably. Sometime after the 1960s, a contemporary wardrobe lasted about ten years. Now things can be declared out-of-date within just a couple of seasons — and then cycle back in again before you’ve even had a chance to offload your clothes.

In the last couple of months, there’s been some talk of a potential prep revival. This comes on the heels of everyone declaring it dead in what feels like just two weeks ago (in terms of historical time, this is measured as three Scaramuccis). Back in 2015, our own Pete wrote a post exploring why menswear had fallen out of love with prep. Part of it is the natural cycle that comes with fashion nowadays, and the other part is that it’s become harder and harder to ignore prep’s associations with privilege.

Everyone likes to stunt sometimes, but prep stunts in ways that seem dated. Prep implies privilege and inherited money; some of prep’s charm comes from the unquestioning self confidence bestowed only by independent wealth. Americans have always had a weird relationship with being born to something vs. earning it. We like to poke fun at the rich, but not too hard, because of course someday that’ll be us. Today we still like our wealth obnoxious, but not smug or entitled. Like other symbols of American investment income, maybe prep needed to come down a notch.

Things seem to be changing though. It all started Noah, a leading streetwear label founded by Brendon Babenzian, who formerly served as Supreme’s creative director. Babenzian’s personal style, which is reflected in his designs, has always been a mixture of skate rat and Northeastern prep. He grew up on a part of Long Island he’s described as being “neither the city nor the Hamptons, but everything in between.” Recalling some of his earlier memories around clothing, he said: “All the kids who wore blue blazers in high school were either super jocks or from well-off families, so I always tried to go another way.” Babenzian wears Brooks Brothers button-downs, but he does it in a way that reflects his love for skating, surfing, and running. There’s a sportiness to his look, as well as DGAF punk attitude.

Although the brand is just a few years old, Noah has been pushing the prep look for a while. In 2016, Sam Hine at GQ was already asking whether Babenzien might be the “one guy who can bring preppy back from the dead.” And this fall, Noah leaned into the prep look a bit harder. Their lookbook features block striped rugbys, tiny-collar OCBDs, needlepoint belts, patchwork shorts, and collegiate sweatshirts that reference imaginary colleges. The collection looks like it came straight out of a 2010 Tumblr obsessed with Gant and Rugby. And it was surprisingly compelling. 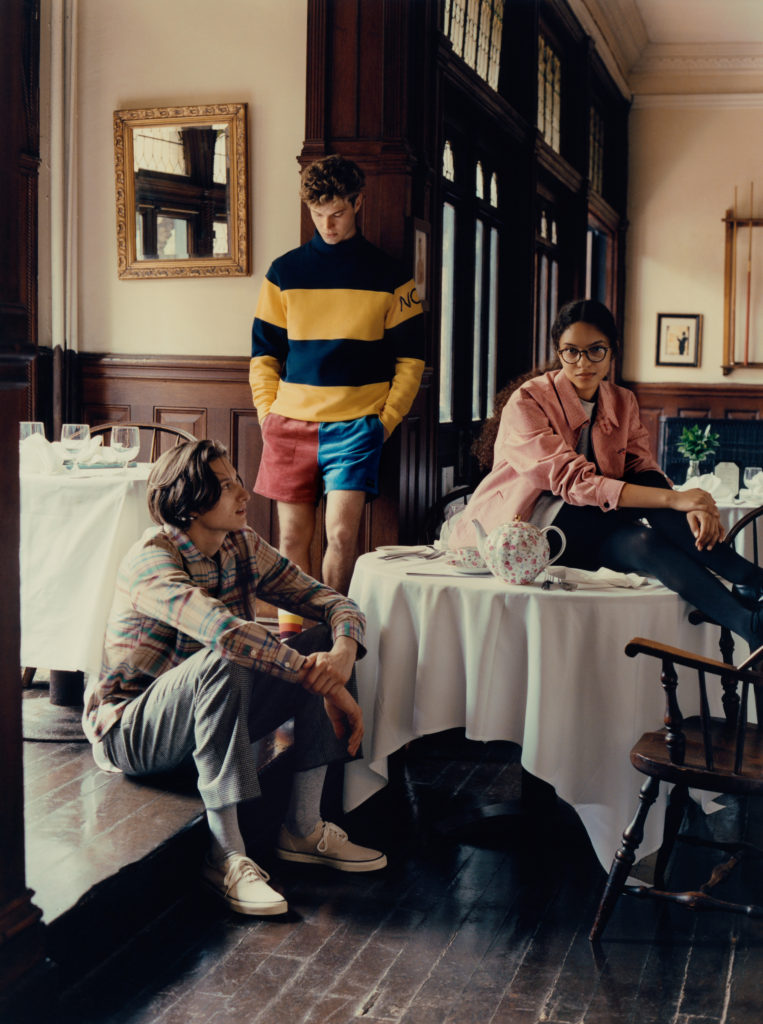 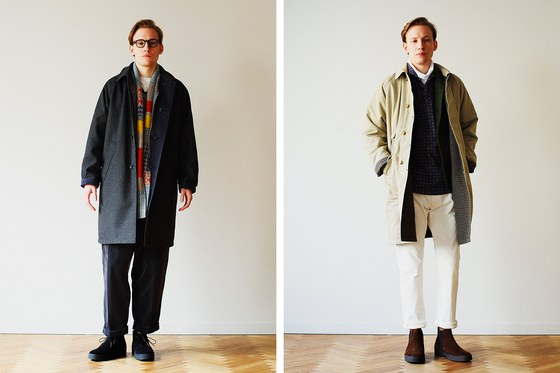 (photos from Noah and Beams lookbooks)

The lookbook made a big enough splash for some writers to wonder if the prep revival was finally happening (sort of like the end-of-slim-fit predictions, these things bubble in cauldron forever with people constantly asking “is it happening, is it happening?”). Tyler Watamanuk at GQ declared “the great preppy style comeback has begun.” Rachel Tashjian at Garage wondered whether this style can get away from its more obnoxious associations. Jacob Gallagher at the Wall Street Journal is cataloging the different stages of the prep revival on Twitter (we are now at stage two).

Fashion turns on big moments, however, and I wondered whether a few solid collections from an obscure, even if culturally important, brand would do anything. It took a show like Mad Men, after all, to get men back into suits. And cultural figures such as Hedi Slimane and Kanye West to make men consider the double rider. Even the articles declaring the return of prep struggled to find examples past Noah (the GQ post tacked on Beams, which has always been around as a youthfully shrunken version of the look).

The one label that may be up for the task is Ralph Lauren. One a sleepy giant with a slipping market share, the company has since become an aggressive champion of classic American style. Back in 2015, Ralph Lauren himself stepped down as CEO and brought on Stefan Larsson, a former H&M executive and president of Old Navy (which Larsson is credited with reviving). In Larsson’s view, Ralph Lauren simply has too much overhead, as well as an unhealthy reliance on department stores and discount shoppers. Fans of the company worried Larsson was going to strip out everything that makes the brand compelling in the first place and reduce it to a bland, middle-of-the-road fast-fashion retailer with quick turnaround schedules and generic clothes.

A year later, Ralph Lauren abruptly announced that Larsson will be leaving after a creative clash with the company’s founder, sending shares of the struggling brand into a tailspin (again, in historical time, Larsson’s tenure is measured as six Scaramuccis). The company took about a year to recoup and it’s since spun 180 degrees, moving from news that it might be stripping down its operations to aggressively championing its heritage and vision. 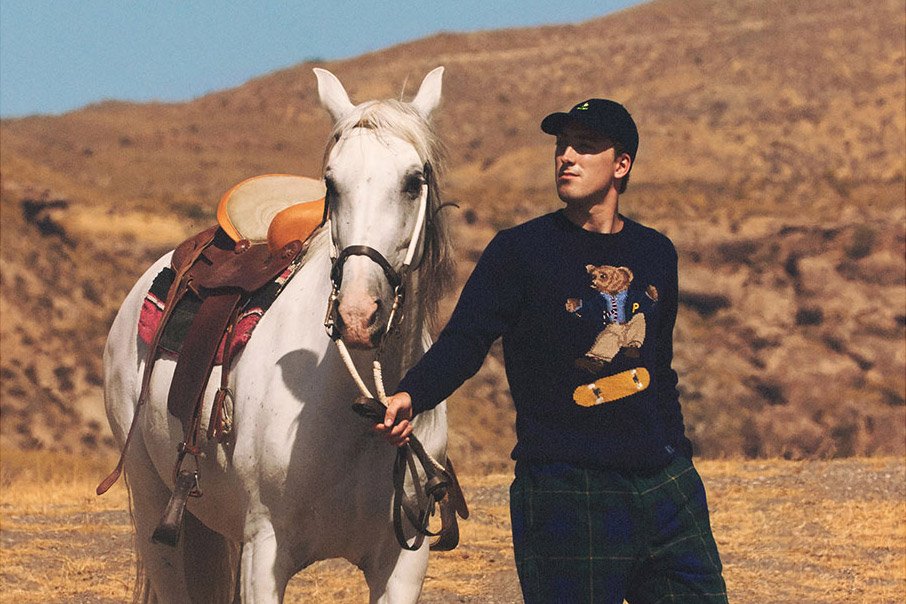 This year has had some important RL moments. Back in February, Complex released Horse Power, a forty minute documentary exploring the symbiotic relationship between Ralph Lauren and hip hop culture. Ralph Lauren has also re-issued some of its most iconic designs, including pieces coveted by Lo Heads (a hip hop subculture of people who wear Ralph Lauren from head-to-toe). Those include the Stadium and P-Wing collections, famous Snow Beach pullover, Polo Hi-Tech, and America’s Cup-inspired CP 93. And this season, the company dusted off the deepest parts of its archive for some exclusive re-issues at Mr. Porter and The Rake.

On November 9th, Ralph Lauren is also releasing a special collaboration with Palace, a much sought-after independent British skateboard brand. It’s a clear attempt to reach out to younger customers, as well as play into fashion’s current obsession with sneakers and streetwear. And the plan is working. While the collection reportedly consists of tops, pants, outerwear and accessories, there’s already a ton of attention on the “Kickflip” Polo Bear sweater shown above, which plays on a classic staple of Lo Head culture. Twitter is abuzz about the bear and there are rumors on Reddit that the collection is already sold out (even though the release date isn’t for another week).

The real turning point, I think, happened this past September with Ralph Lauren’s 50th anniversary show, which celebrated the longest running and arguably most successful career of any single person in fashion. Robin Givhan, who was tepid about RL’s spring/ summer presentation (asking if the company’s design studios are hermetically sealed, as the clothes looked so out of touch), glowed about the anniversary show at the Wall Street Journal.

The night unfurled with cinematic élan. Guests arrived at the entrance to Central Park where they boarded little white trolleys that rolled through the park, past the curious evening joggers and dog walkers, to the entrance of Bethesda Terrace where they disembarked in their tuxedos and evening dress. The entry was aglow with LED screens projecting archival images of Lauren’s work, which is essentially the story of all the things in our closet that we think of as quintessentially American: the jeans and polo shirts, button-down Oxfords, crewneck sweaters, Western jackets and cowboy boots and flannel shirts. Lauren didn’t invent them; but he turned them into a cohesive vocabulary that gave us the capacity to describe a collective aesthetic identity. He gave us a national uniform.

For any American company, 50 years is something to celebrate. For a fashion company, it’s remarkable, particularly because Lauren remains at the helm. For years, American fashion was defined by Ralph, Calvin and Donna. Calvin Klein long ago sold his business. Donna Karan has also moved on and the collection was shuttered by its owners. Other monumental names such as Oscar de la Renta and Bill Blass have died and the legacy of their brands is yet to be determined.

If the idea of Ralph Lauren bringing back prep seems absurd, remember that the brand has already played a critical role in keeping classic menswear alive. Many men’s first introduction to tweed sport coats, chambray shirts, double soled wingtips, oxford button-downs, Shetland sweaters, and penny loafers happened at a Ralph Lauren flagship. As Ethan Newton of Bryceland’s recently said in a Blamo! interview, “Ralph Lauren gave many men the vocabulary to speak the language of classic men’s clothing.” And while Brooks Brothers has many of the same items, they simply aren’t sexy — Ralph Lauren made classic men’s clothing appealing to many men of my generation.

More importantly, prep needs to shake its associations with stuffed shirt elitism based not on merit but exclusion. In a recent Ivy Style post about a Rowing Blazers and Noah collaboration — where proceeds from the collection are going to Row New York, a nonprofit that gets young Black kids, who otherwise wouldn’t have access, into the sport of rowing — one commenter said he didn’t want to see “poor, urban kids” in blazers. Readers also complained when they saw Black models in LL Bean ads, accusing the company of losing its authenticity and pandering to white guilt.

Ralph Lauren, on the other hand, brought racial diversity into his runway shows and advertising campaigns “long before doing so became a rallying cry, long before there was social media and the capacity to tweet a company into submission.” The company has always had the unique ability to make its clothes feel aspirational, but also make everyone feel like they’re welcomed at the table. That’s the sort of framing that will bring back prep, and Ralph Lauren’s marketing team is only getting started.