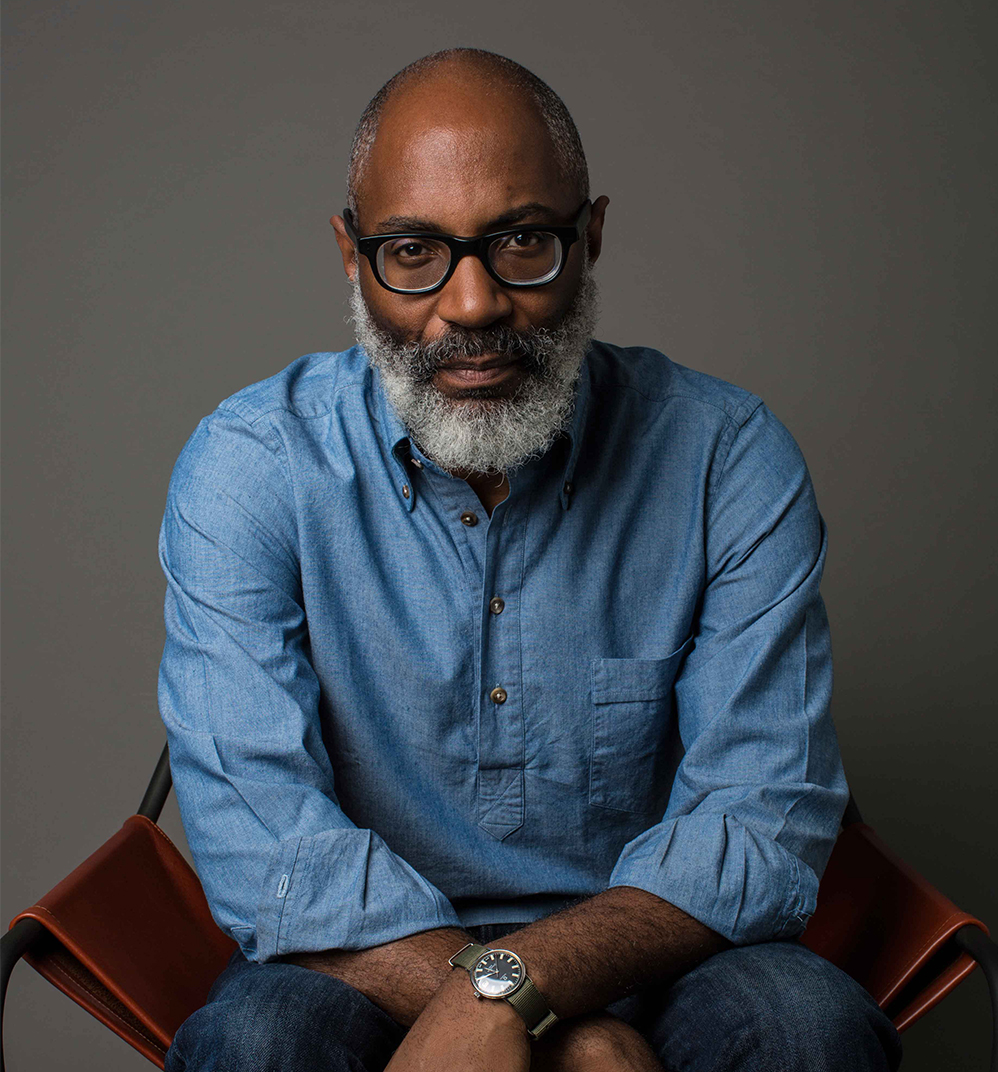 Every once in a while, we’ll get an email from a reader asking if we have suggestions for how to build a more casual wardrobe. It’s hard to give recommendations because, unlike with tailoring, there aren’t any rules in casualwear. To the degree that certain things can be universally good, most guys can use a better pair of jeans. And the sort of things that accompany them — work boots and chambray shirts.

Chambray, for those unfamiliar, is a close cousin of oxford cloth. Both are dependable workhorse fabrics that can be used in many different situations — straddling the line between formal and casual, depending on the shirt’s details (more on that later). And while you can find them in a range of colors, from optic whites to dusty pinks, they’re most versatile in light blue (the best color for shirts, we think).

A quick word about weaves. To understand chambray, you have to know that the two most common weaves are plain and twill. Twill is what you’ll find on your jeans. It’s distinguished by its subtle ribbing and, often, is slightly heavier in weight. Plain weaves, on the other hand, are made from a simpler cross hatching of yarns, such that each yarn passes over the crossing one in an over-and-under pattern. Think of a basketweave, but finer.

The reason why this is useful to know is because chambray is often mistaken for denim, but the two aren’t the same. Denim shirts are typically heavier and stouter; chambray lighter in weight and more comfortable. This is one of the reasons why, in the early 20th-century, denim was typically used for pants and outerwear, while chambray was reserved for shirts. Farmers, sailors, and factory workers wore chambray shirts because the fabric was comfortable, cheap, and easy to clean (plus, in blue, it hid dirt a bit more easily than white cottons). Hence how we get the term, “blue collar worker.”

We’ve written before about how things such as chinos can be cut and detailed in different ways to swing them towards the more casual or dressier side of the spectrum. Chambray shirts follow many of the same rules. The more detailed the shirt, the more casual it’s considered; the cleaner the look, the dressier. Here’s how to tell the difference between the two, along with suggestions on how to wear each style: 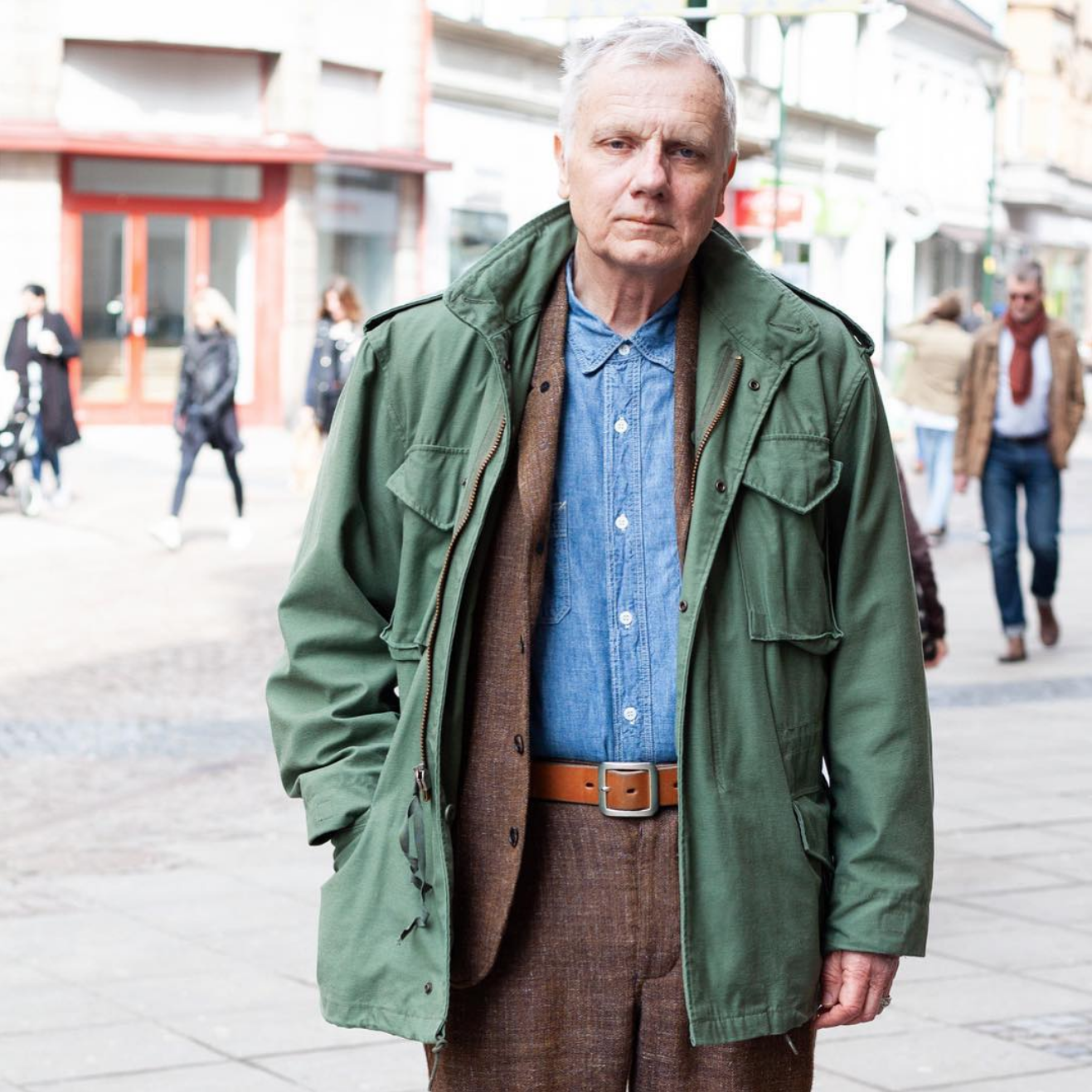 The classic chambray typically has a workwear sensibility, drawing on the style’s utilitarian roots. On these, you’ll often find a double row of stitching at the side seams, then two pockets at the chest (making it slightly closer to a sport shirt, rather than suit-only dress shirts, which typically don’t have any chest pockets). On higher-end models, you’ll also often find some vintage-inspired detailing — chain stitching running off the hem, cat eye buttons, and maybe indigo-dyed yarns. You’ll know when you’re looking at a workwear chambray because there will be lots of rugged detailing.

You can find these from companies such as Real McCoys, Buzz Rickson, Rogue Territory, Orslow, Left Field, Jean Shop, Indigofera, Knickerbocker Mfg, and RRL. Engineered Garments is also popular. Their slightly off-beat style for their chest pockets distinguishes them from the more common variety. One of my favorites in this category is made by Chimala, a Japanese company known for its subtle pre-distressing.  On their work shirts, for example, you’ll find a bit of fraying or darning — details that are hard to achieve on your own if you, like me, work in air-conditioned offices rather than actual job sites. Full retail on these is painfully expensive, but you can sometimes catch them on eBay for about $150.

You can wear workwear style chambrays with things such as bomber jackets, field jackets, and deck jackets. If the fabric isn’t too rugged or heavy, they can also sit pretty comfortably underneath sweaters. Keep these towards the casual end of things. They’re like a more rugged alternative to oxford-cloth button-downs, often better with jeans or rugged chinos, rather than tailored trousers.

(photo above via The Urban Hippie Swe) 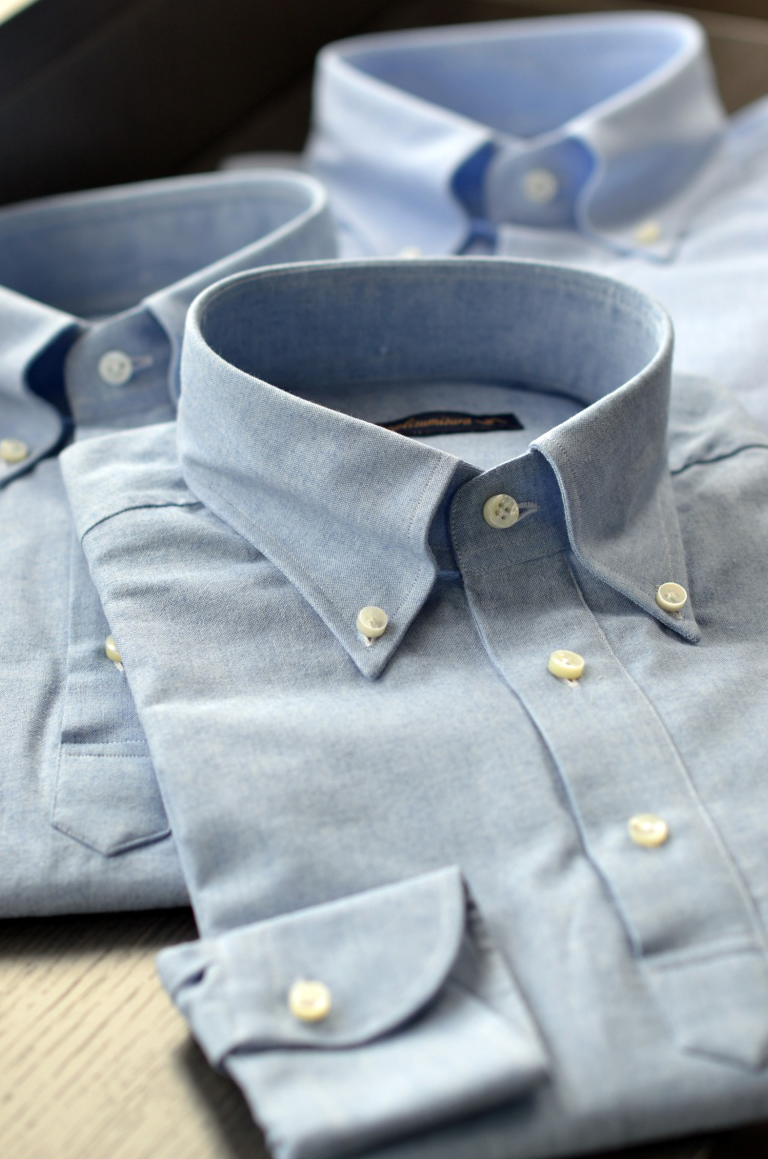 The other variety of chambray swings dressier. On first blush, these can look pretty similar to end-on-end, depending on the exact fabric. The difference between these and the previous category is that they’ll look cleaner. Instead of cat eye buttons, you’ll find your standard mother-of-pearl. Instead of double-needle side-seams, these will often be single-needle sewn. Instead of chain stitching hanging off the hem, they’ll be cleanly finished. You know … it’ll look like a dress shirt.

You can find these at the same places you’ll find your other favorite dress shirts: Brooks Brothers, G. Inglese, Gitman Vintage, Kamakura, and Drake’s. One of our sponsors, Proper Cloth, can also do made-to-measure chambrays, which allows you to choose all your details (I particularly like their Ivy collar, which is large enough to give the button-down collar a proper roll). Online made-to-measure can sometimes be dicey, but I’ve been impressed with the shirts I’ve bought from them (although they’re a sponsor here, I’ve paid full price for all my shirts). They offer a free remake on all first-time orders, which helps you dial-in on the fit.

Dressier chambrays can be a great way to take out some of the formality inherent in tailored clothing. They go well with things such as tobacco linen suits, navy hopsack sport coat, and brown tweeds. They can also be worn with jeans if you find the workwear variety to be too early-20th century. 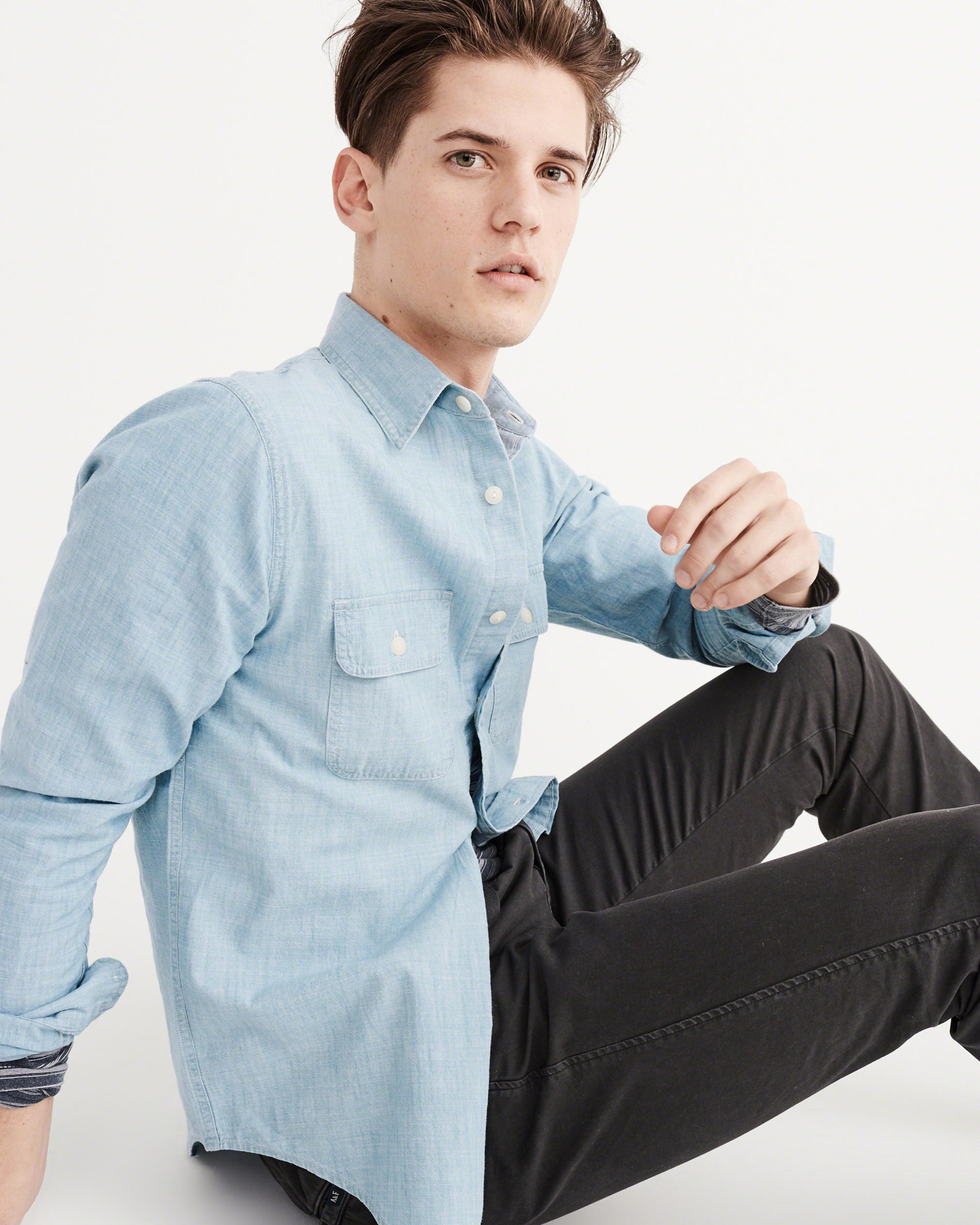 Finally, if you’re looking for an affordable alternative, the good news is that chambray — originally valued for its affordability anyway — has a pretty narrow range in terms of quality. Unlike cashmere knits, it’s hard to go wrong here. Which means, so long as the shirt fits well and you like the detailing, it’ll be just about as good as anything else you’ll find on the market.

Good starting places for these are the same stores we always recommend for value-minded shoppers — Ralph Lauren, Club Monaco, and J. Crew (J. Crew is always good for this kind of stuff — basic causal shirt in cotton, in a fit they’ve perfected over the years). And, as usual, you’ll want to shop on sale. Basics such as these are easy to find discounted for between 25% and 50% off during sales season. Abercrombie & Fitch, which has really shored up its image since Aaron Levine took over, has a pretty handsome chambray right now for just $40. When shopping, just pay attention to the details, which will throw the shirt into more casual or dressy territory, as described above. 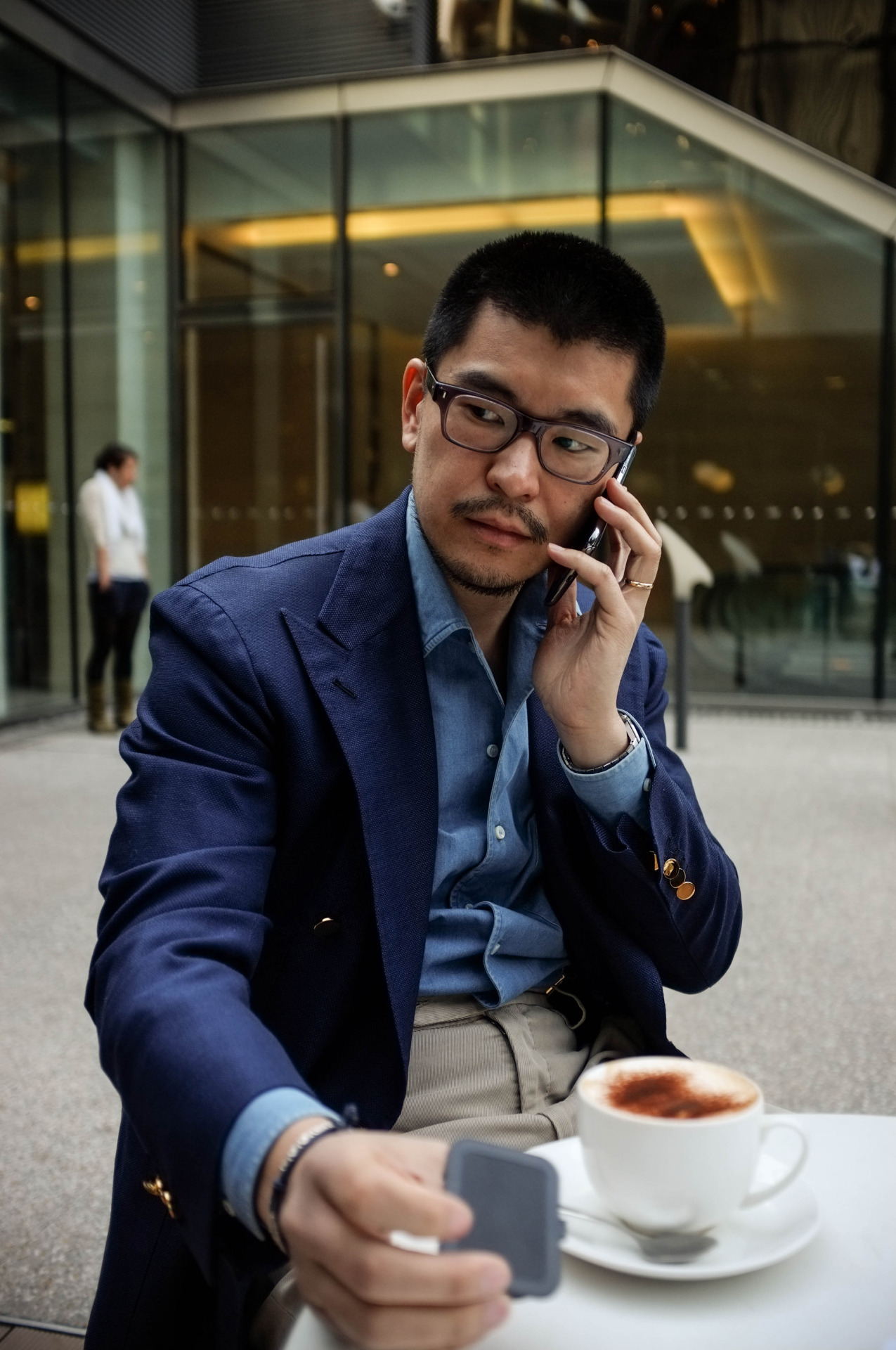 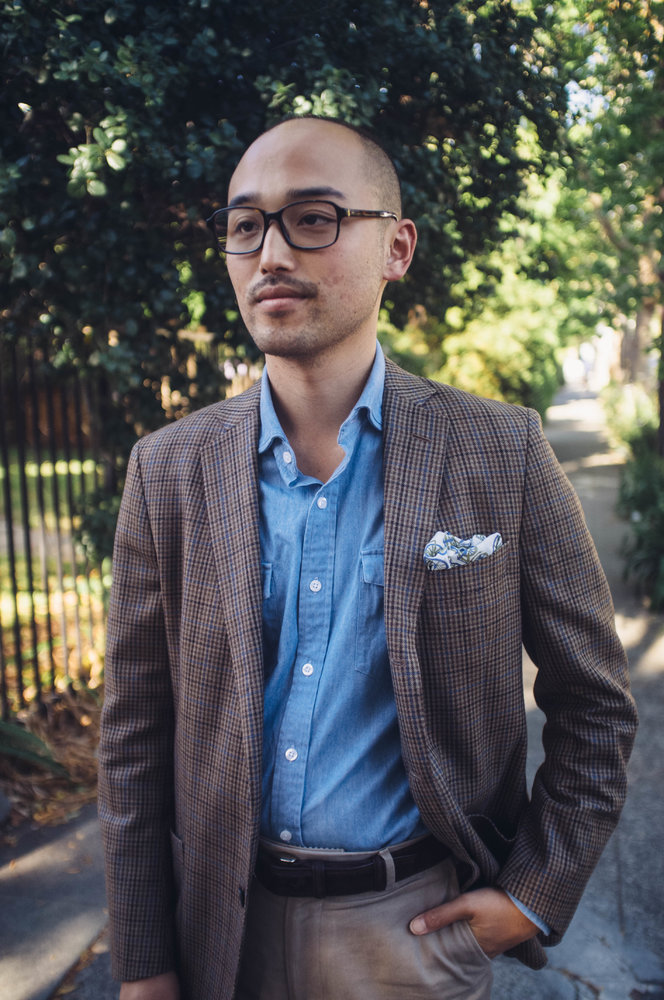 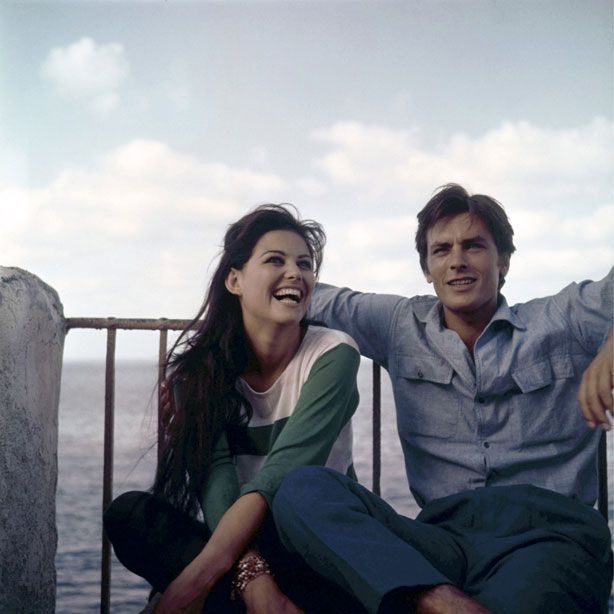 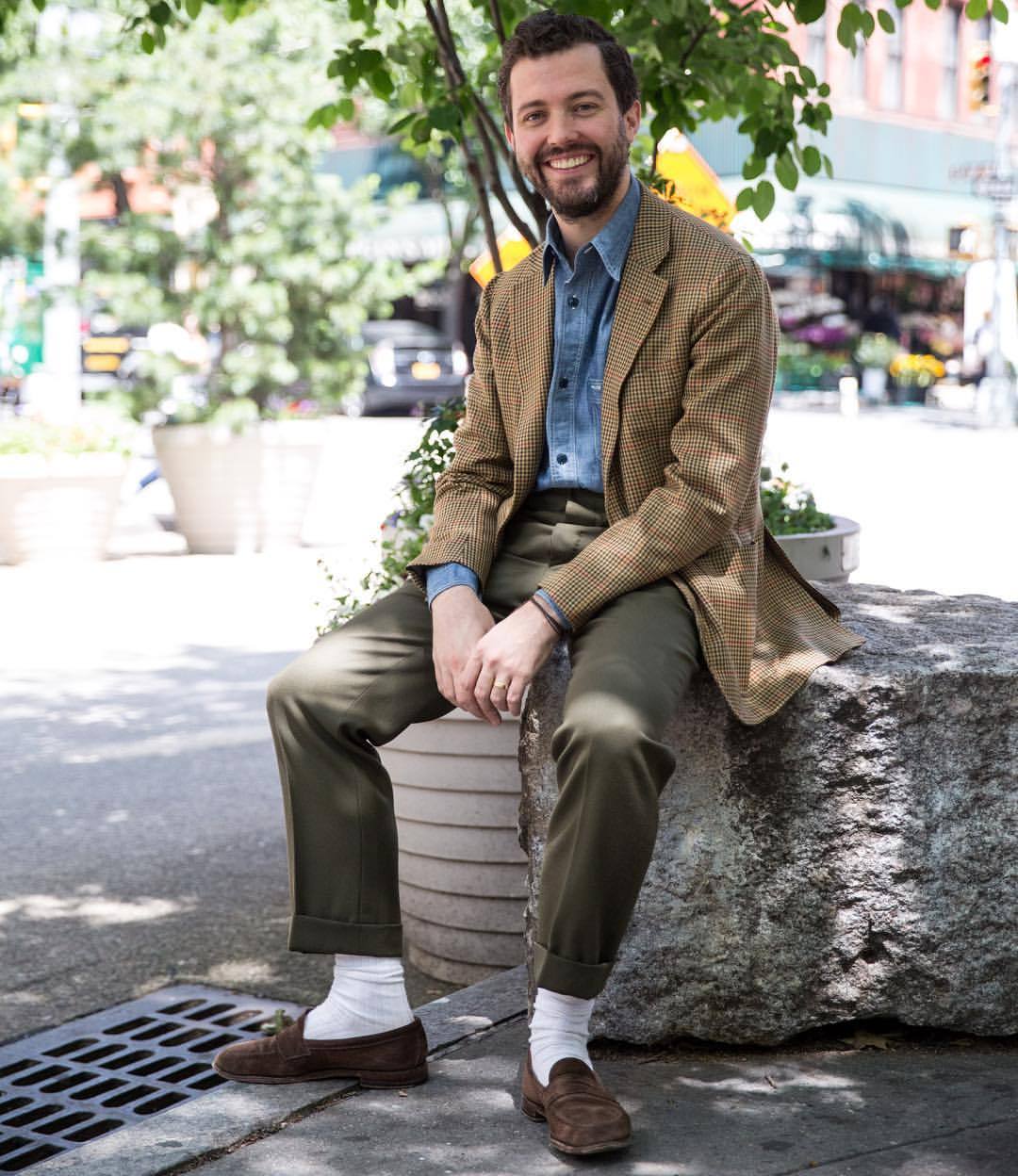 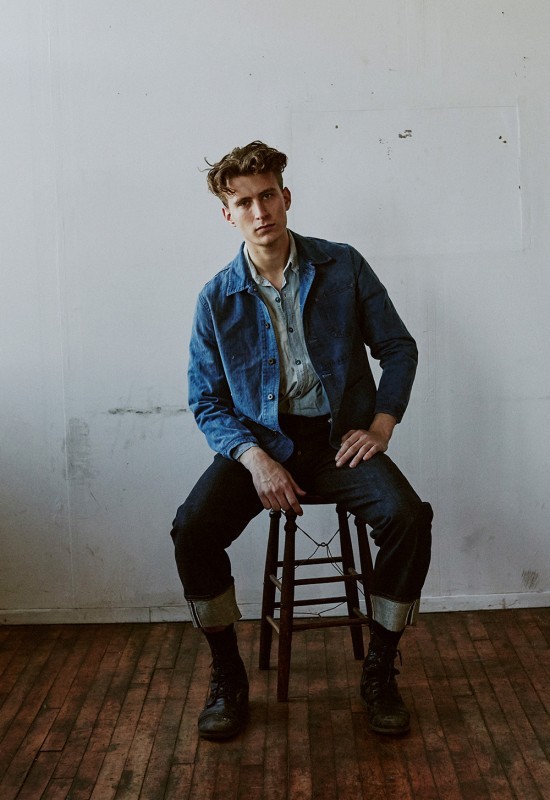 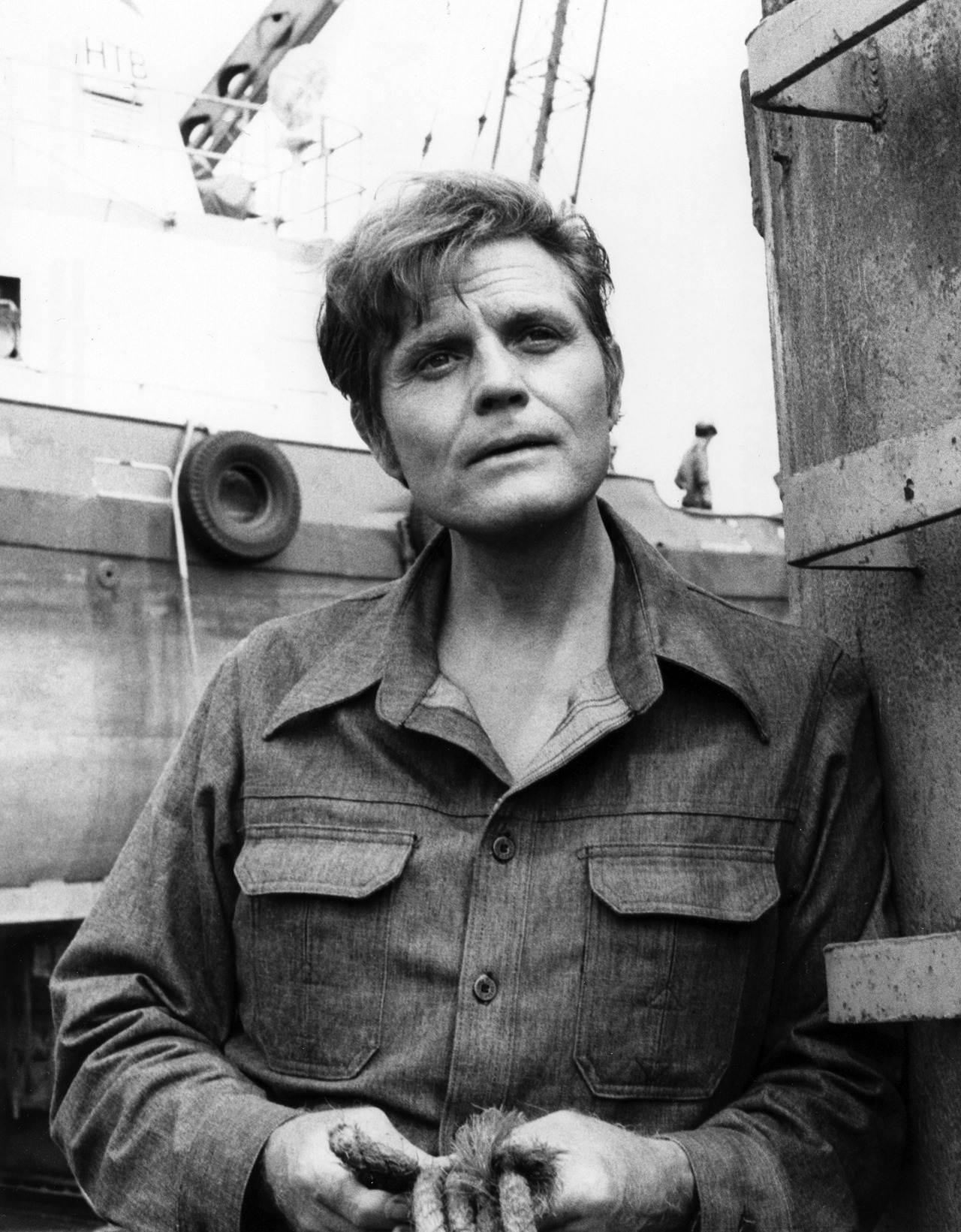 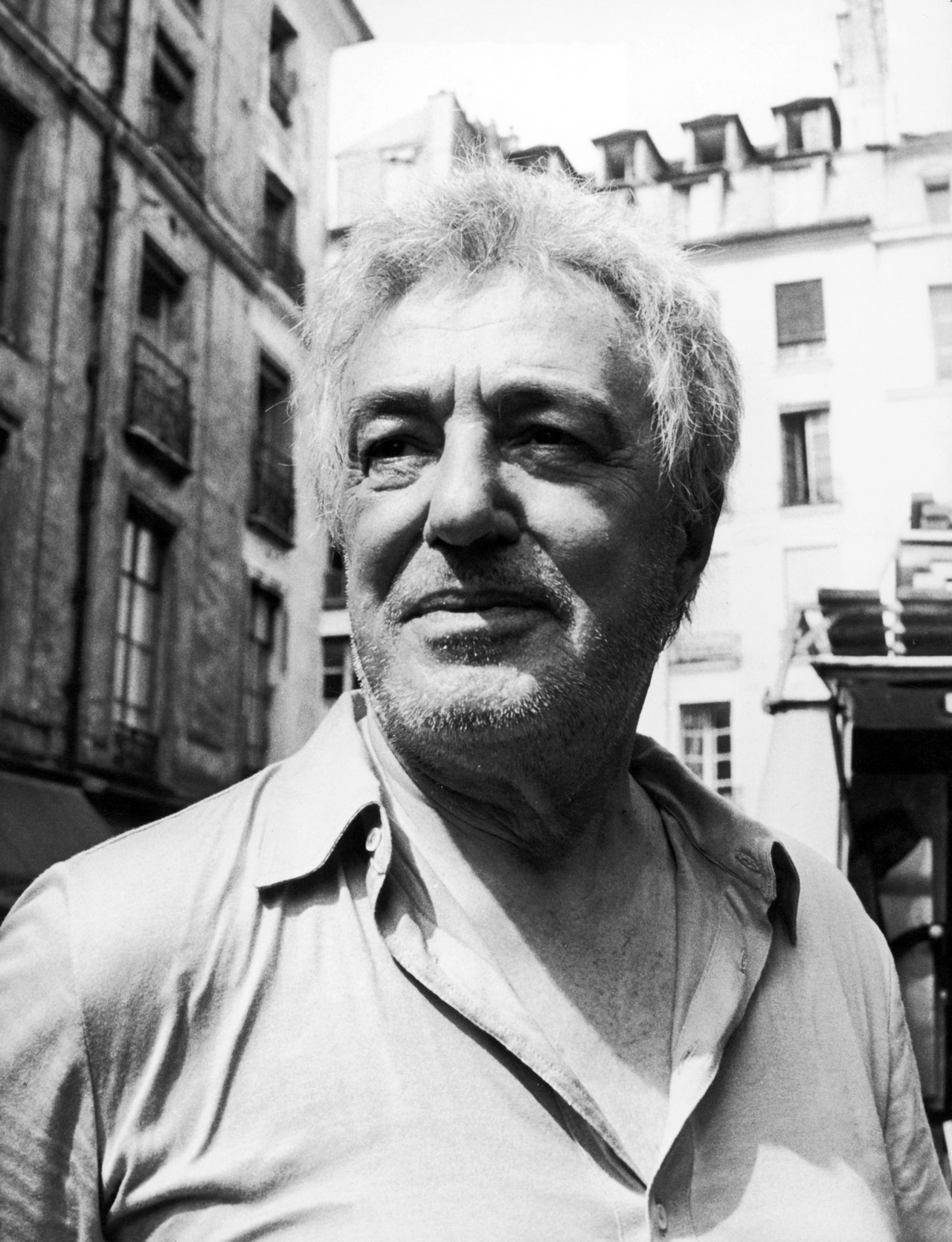 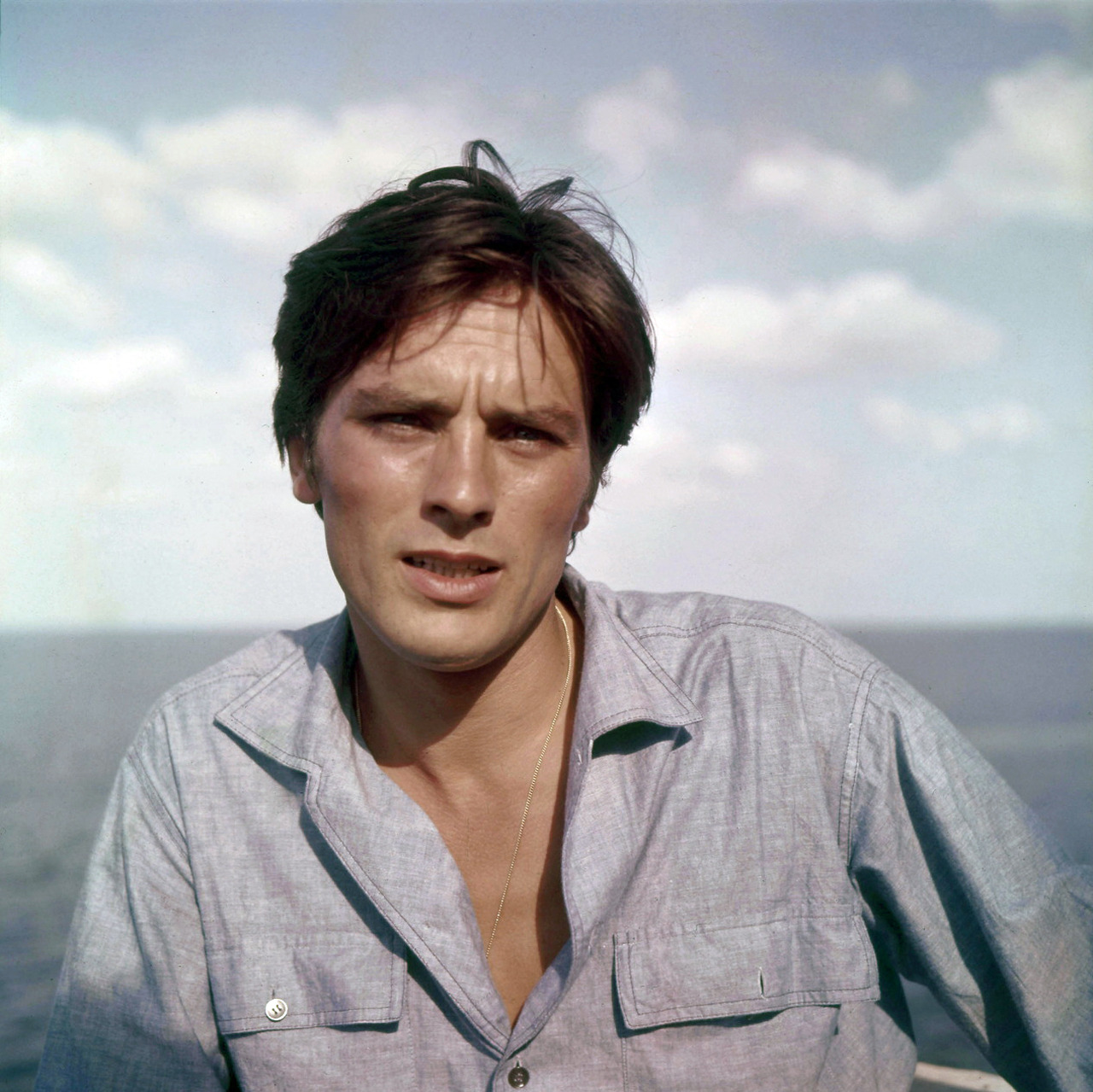 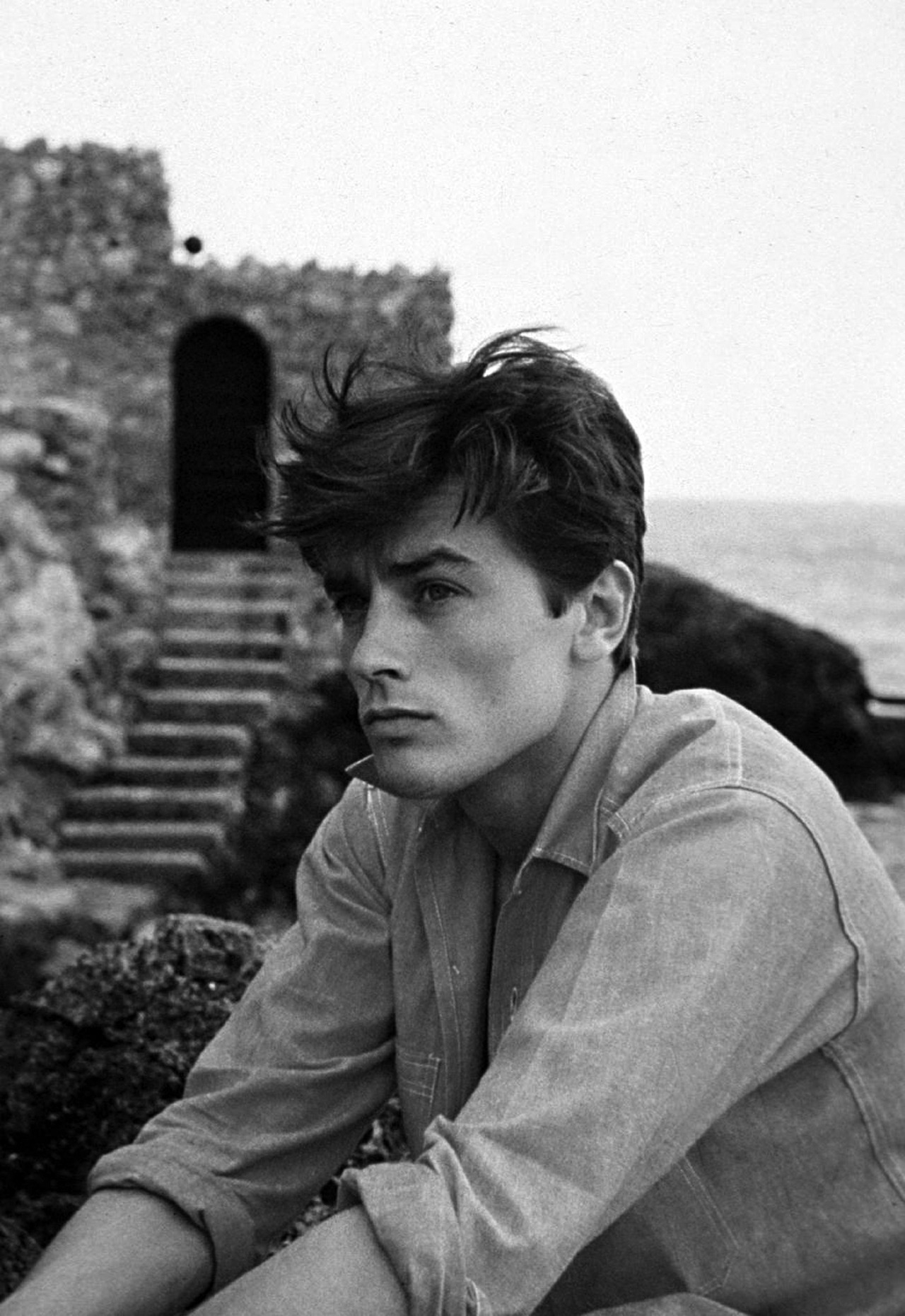 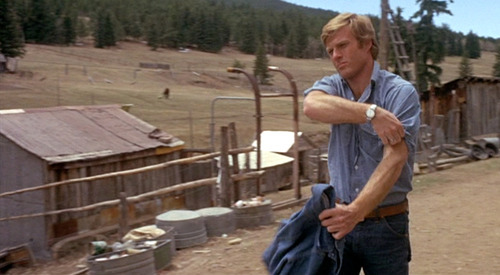 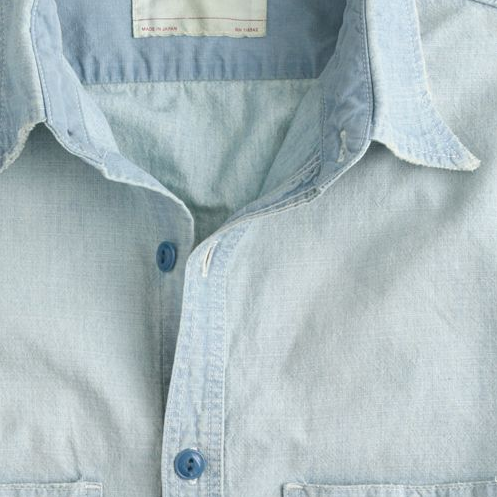 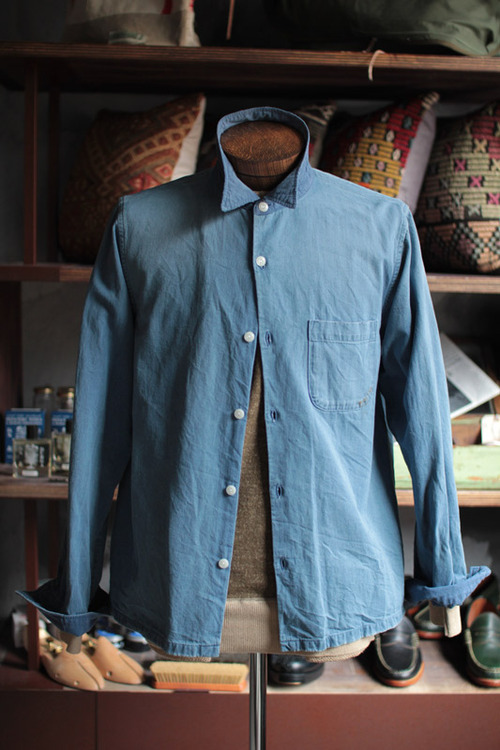 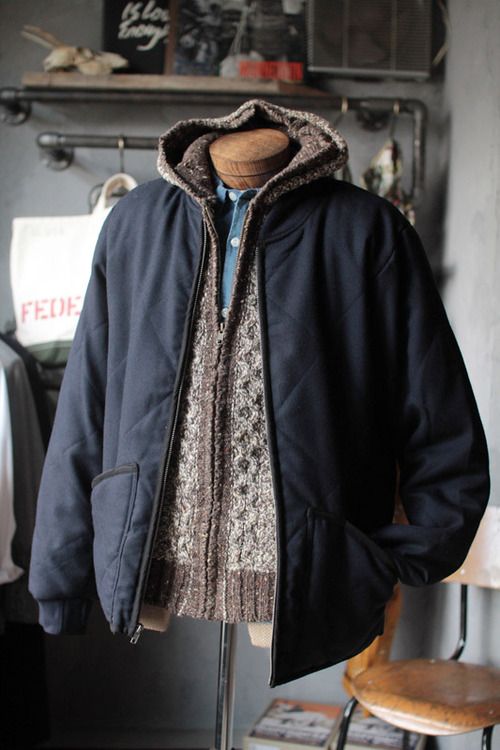 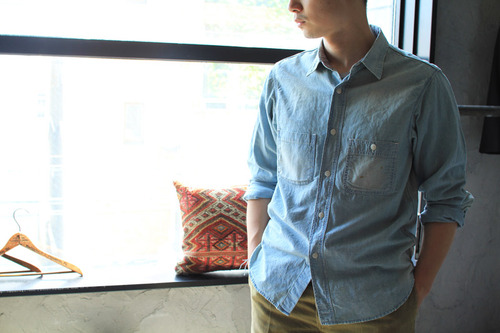 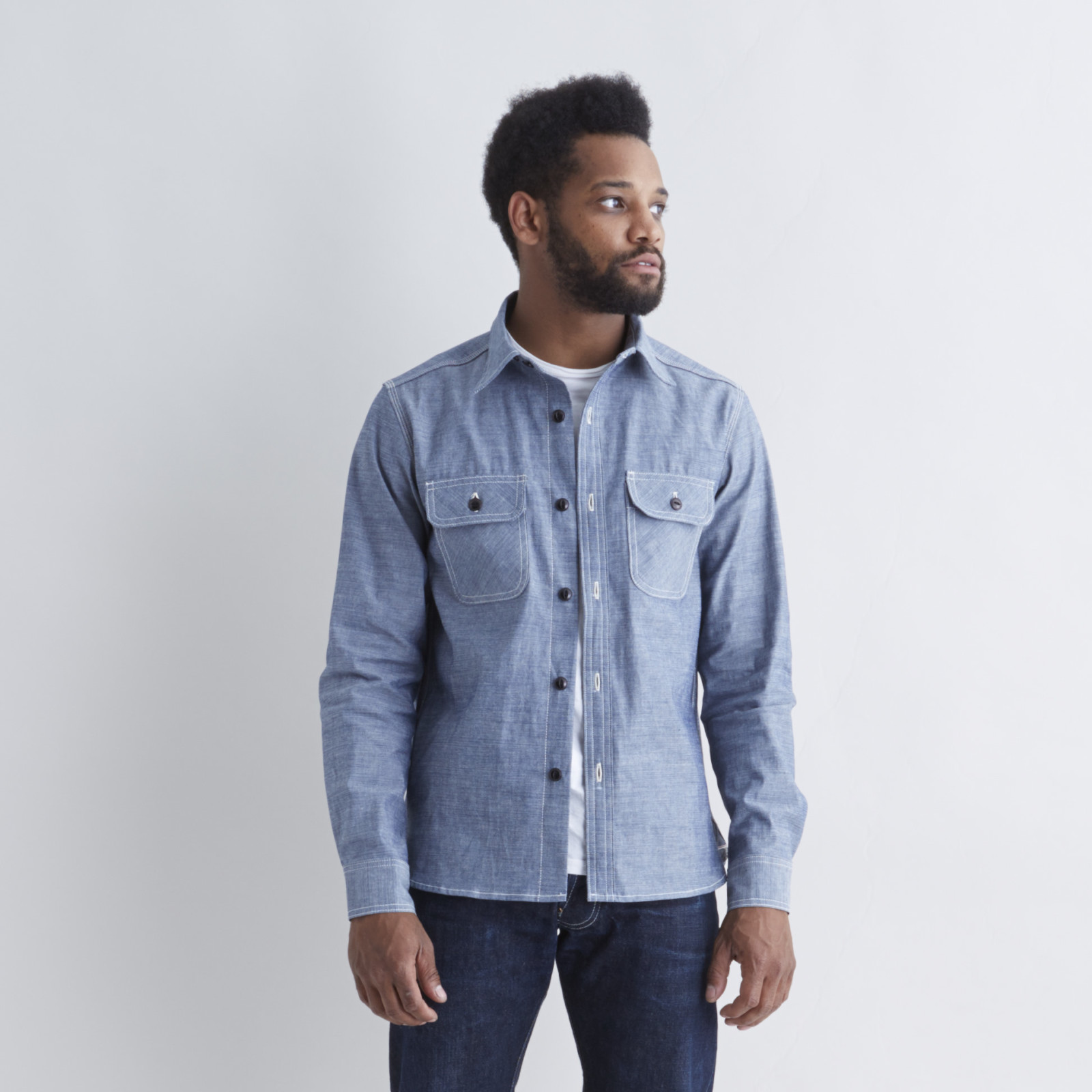 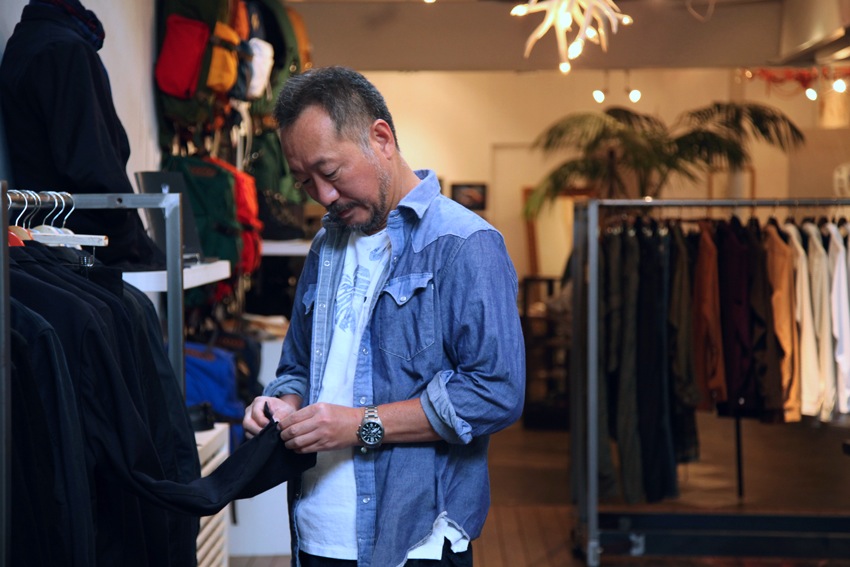 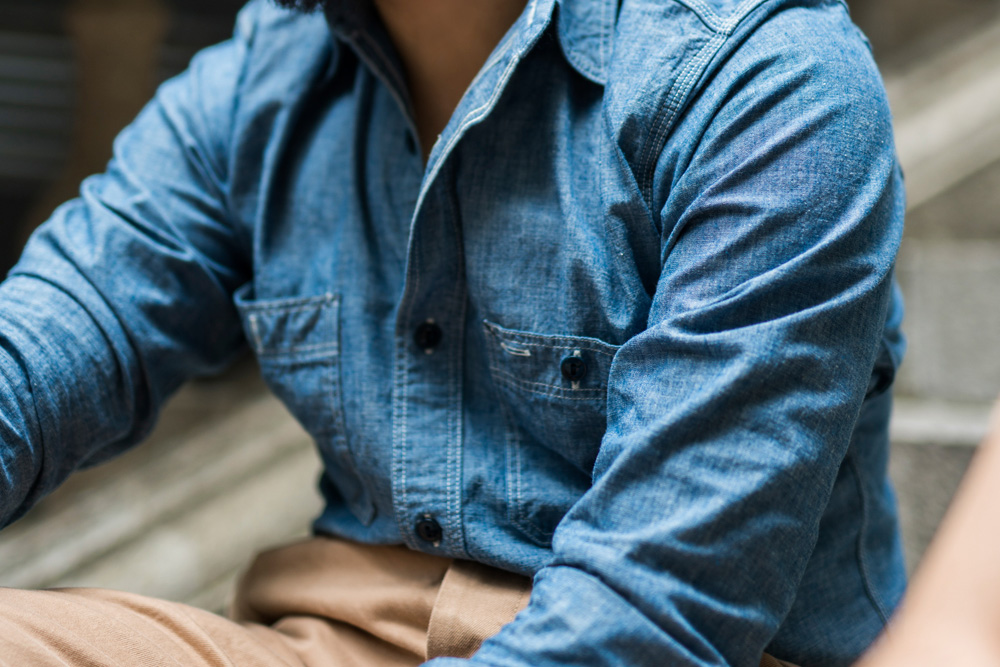 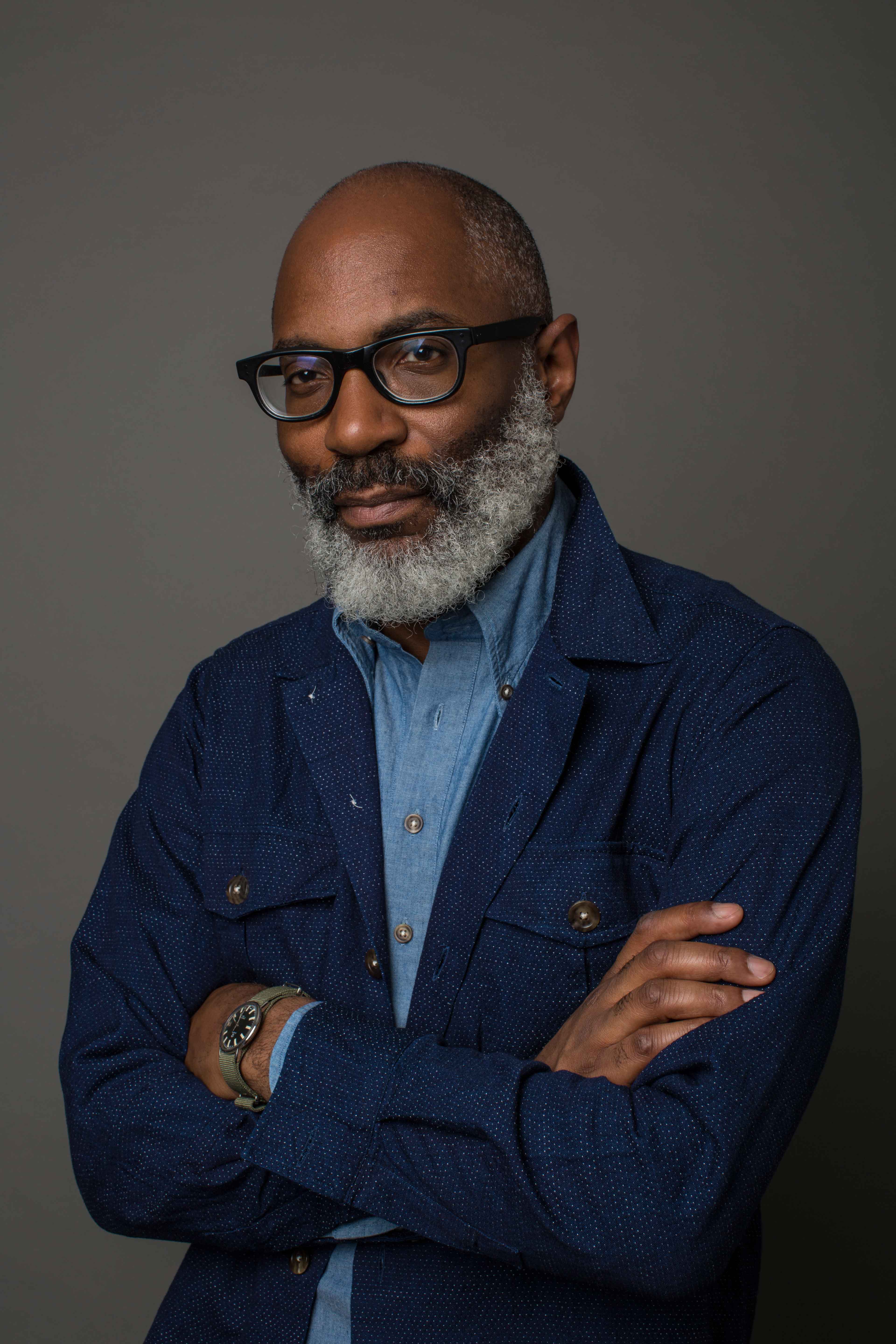 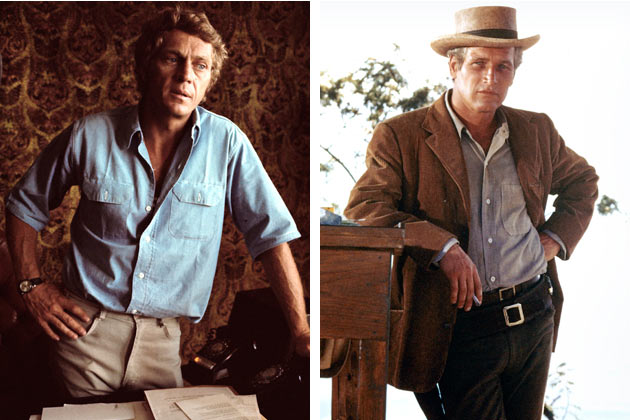 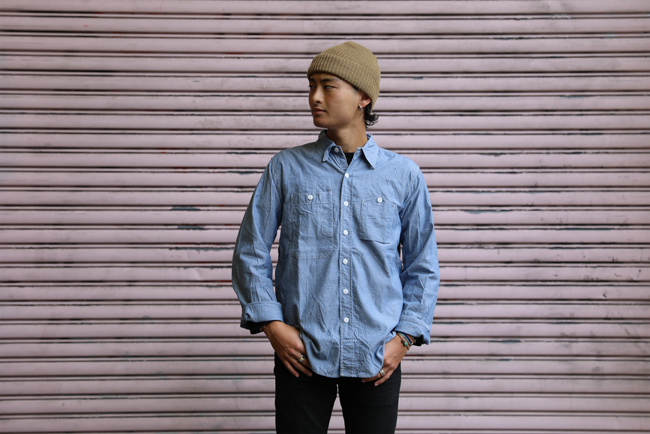 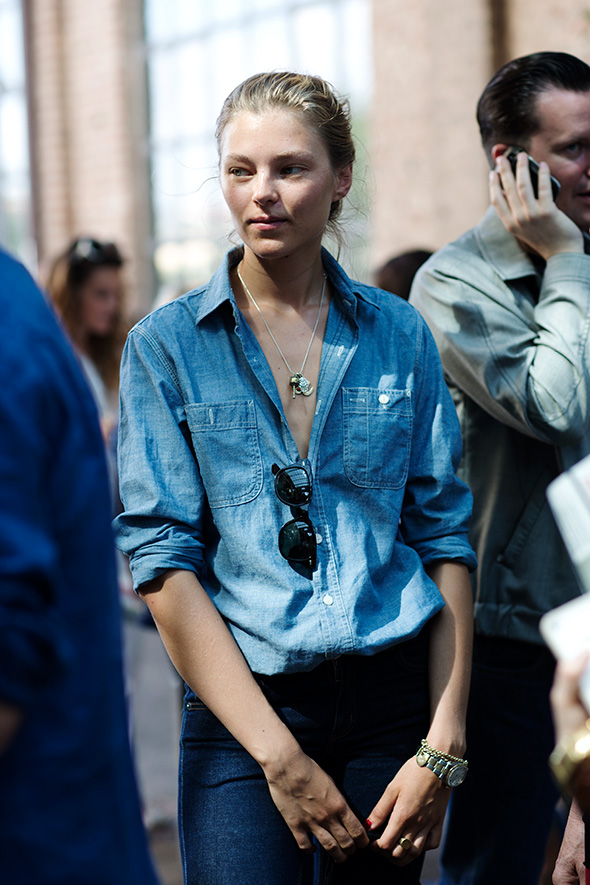