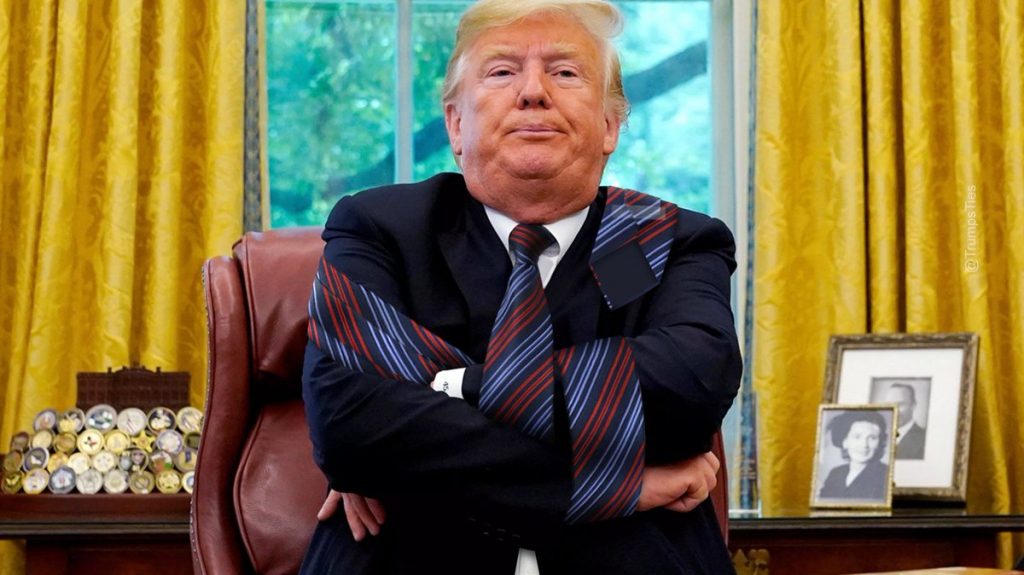 The Trump administration is a revolving door of hiring and firing, which, aside from being generally bad for getting things done in government, results in a lot of fired staff with axes to grind and book deals waiting for them. Adding to this Barnes & Noble section is Chris Christie’s upcoming book Let Me Finish. Several excerpts were published by The Guardian today. While most of it is about the long simmering feud between Christie and Jared Kushner (a long, strange case of family and criminality that’s both fascinating and depressing), there’s a tidbit that may explain one the greatest political mysteries — what the hell is up with Donald Trump’s ties?

We’ve taken looks at the president’s sartorial choices before, but it’s his weird tie choices that have so often been the focus of the media, drawing mockery and satire. During the 2016 campaign, the great conservative humorist P.J. O’Rourke remarked on Trump’s neckwear. “Trump is six-three and wears a Windsor knot, which takes up slack,” he wrote. “How does he get the tip of his ties to go where no tie has ever been, hanging midway between nuts and knees? The ties must be made to special (and unwelcome) order.”

Some people have tried explaining this with some pretty weird psychological theories. Stanford legal scholar Richard Ford wrote a New York Times op-ed suggesting that the ties are a desperate show of manhood (“Trump’s symmetrical but overlong tie stands out like a rehearsed macho boast, crass and overcompensating,” Ford writes, comparing the ties to a bulky codpiece). He also said that it may be a signal to his working-class supporters:

Mr. Trump’s neckties tell us something about his social and political ties. He has made the persona of the loud, tacky mogul a sort of trademark. Many of his supporters cheer him on because of his lack of refinement — they consider him a refreshing change from patrician politicians born with a silver tie bar clutched in their long elegant fingers.

The real reason might be simpler — and more vain. In his book, Christie reveals that Trump privately exhorted him to wear longer ties, claiming that it would make him look thinner. Which raises the question of whether Trump wears over-long ties himself because he thinks he’s creating an optical illusion.

The idea that clothes can make you look taller or shorter, thinner or wider, is a source of endless debate in the menswear world. Some guys, such as Alan Flusser, insist that men should dress for their body type. There’s some truth to this, as certain forms of tailoring can give you a better looking figure. One of the best examples of this is the Duke of Windsor. One of his tailors at the time, Frederick Scholte, noticed what happens when you belted up a Guardsman’s coat — the chest became a little fuller, the waist nipped, and the overall silhouette looked a bit more masculine and athletic.

Scholte incorporated a similar look into his suits and sport coats. By strategically cutting the panels in a certain way, and filling the interior with a chest piece that’s been cut on a bias, he was able to create a chest that sits slightly off the body. The drape cut, as it’s known, refers to how the excess fabric “drapes” near armhole. And like the Guardsman coat, it gives the wearer the illusion of a more athletic figure. Today, companies such as Steed carry on the drape-cut tradition.

There are plenty of other examples of how clothes can give you a new silhouette, but they’re nuanced and require a keen eye (we’ve covered this for both tailoring and casualwear). But the more commonly held ideas — such as the one about how horizontal stripes make you look heavier and vertical stripes make you look taller — are pseudo-science at best. Elongating a tie doesn’t make you look thinner, just disproportionate and goofy. Most of the time, these tips-and-tricks are just about assuaging men’s insecurities, much like how George Costanza thought he could get away with looking taller by wearing Timberlands.

The width of your ties should roughly mirror the width of your lapels (between 7.5 cm and 9 cm is considered classic). And when worn, the tip should end somewhere around the middle of your waistband. It doesn’t have to exact, but it should be close. A quick fix to any tie that’s lying too long is to do a double four-in-hand, which is a basic four-in-hand like your dad taught you, except you just loop the tie around another time before knotting. If you need something altered, Tiecrafters is reliable. And our sponsor Chipp can custom-produce ties to almost length. For real suggestions on how to dress a bigger figure, take cues from Jackie Gleason or Ethan Newton.

As for why Donald Trump Scotch taped his ties, that remains unsolved.