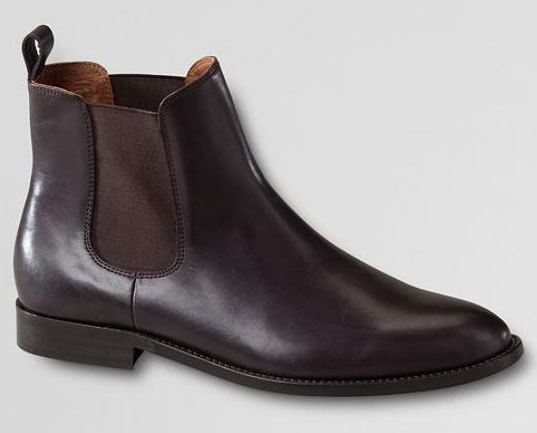 Folks are always asking me about more affordable boot options for the cool-weather months. It makes sense – most of the good stuff starts in the $300-400 range and goes up from there. That’s a serious dent in anyone’s pocketbook. It’s tough to find something that’s both cheap and recommendable.

These look like they might be an exception: the Lands’ End Fulton. A Chelsea boot can be very versatile – it can be casual enough for jeans, and can even be pulled off with a suit in some circumstances. It also moves easily from day to night. They’re a classic utility player. These ones look like a bargain, too.

It can be tough to find shoes (to say nothing of boots) made of actual full-grain leather for less than $300, and these guys retail for $158. Add one of those 25 or 30% off coupons that Lands’ End is always passing around, and you’re barely over a hundey.

These aren’t RM Williams or Crockett & Jones. They’re “imported” (presumably made in China), they advertise a “full leather welt,” but don’t say whether the welt is functional or decorative, and I’m sure that full-grain leather falls short of ultra-premium. Still, this looks like a workhorse boot for an excellent price. The best part is that they’re Lands’ End, so if they don’t work out for any reason at all, you can return them, no questions asked.