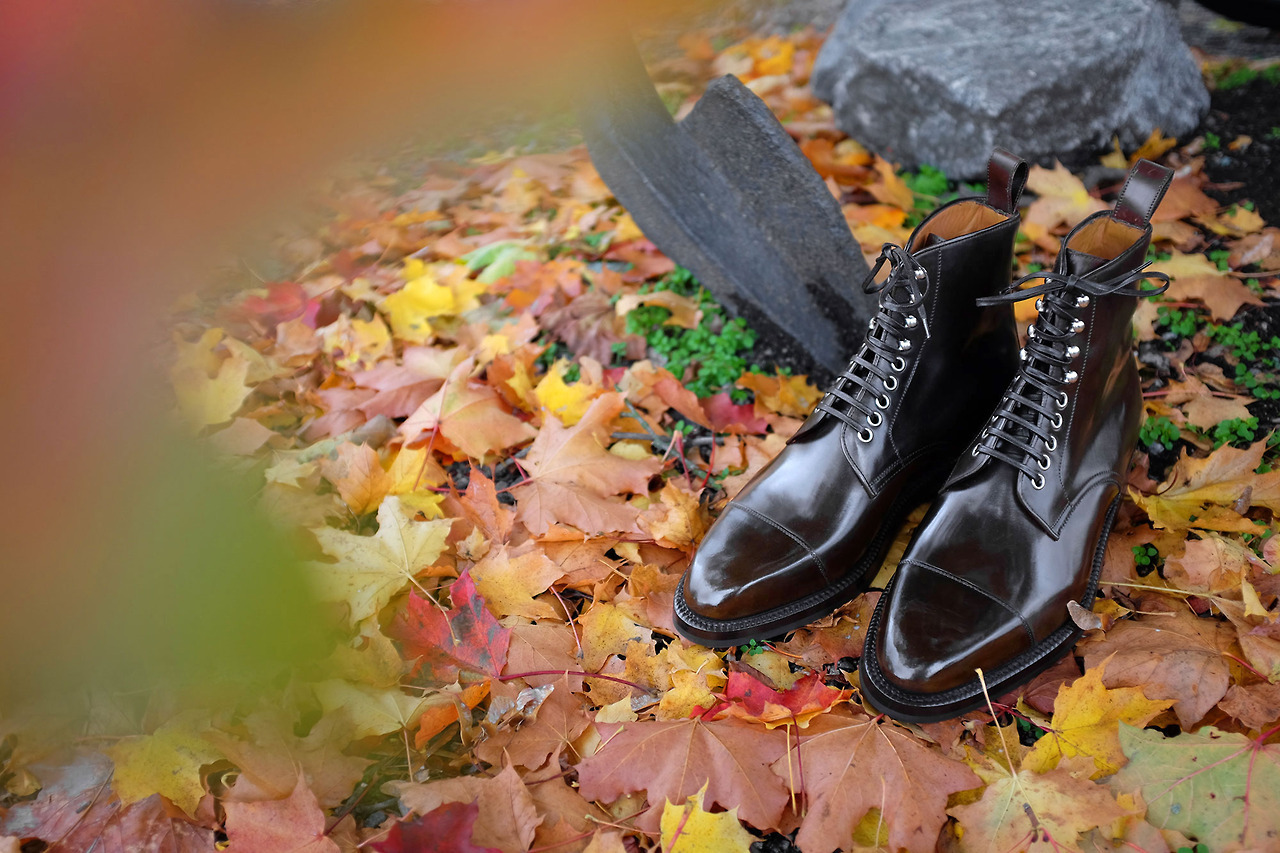 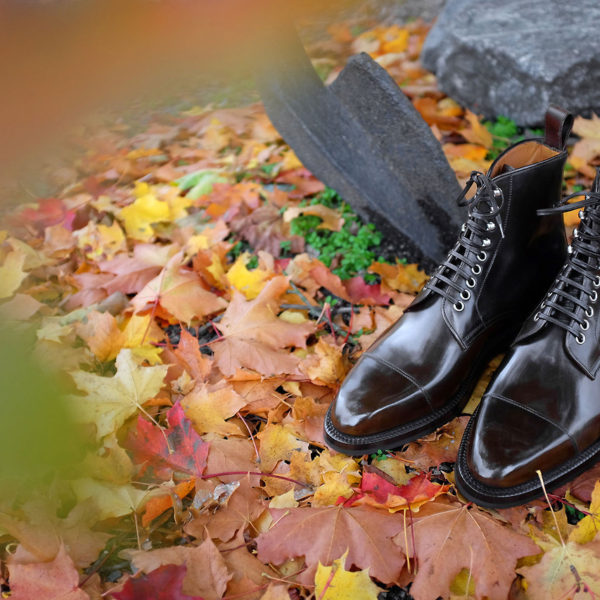 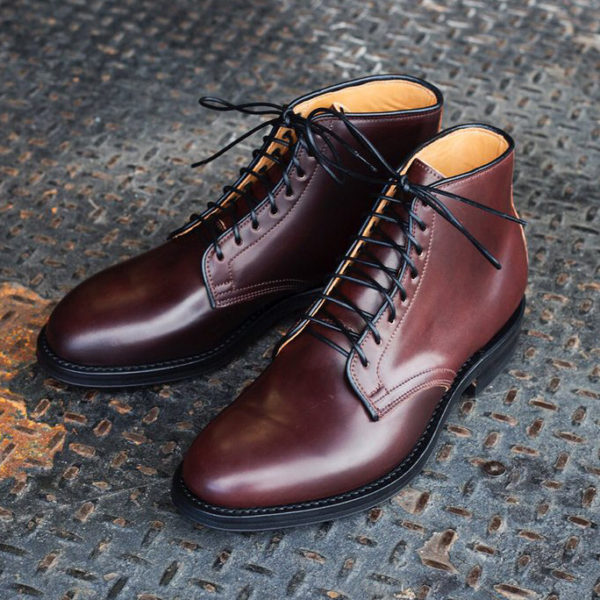 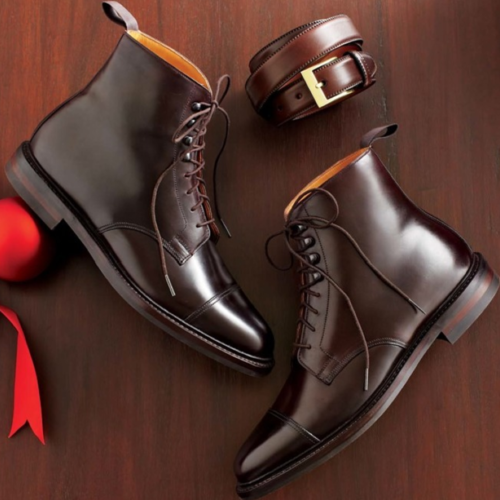 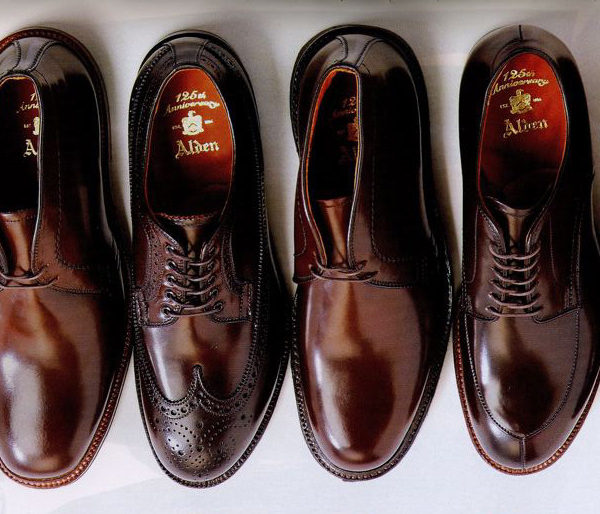 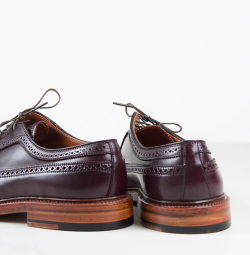 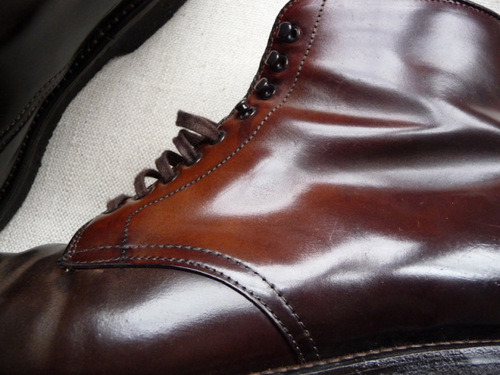 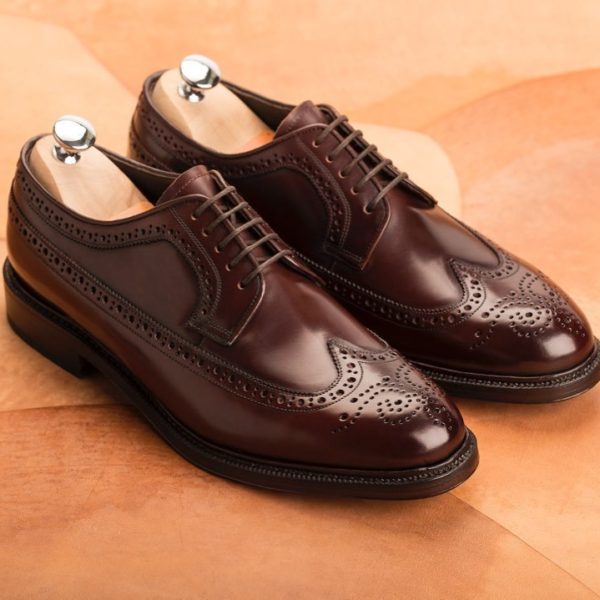 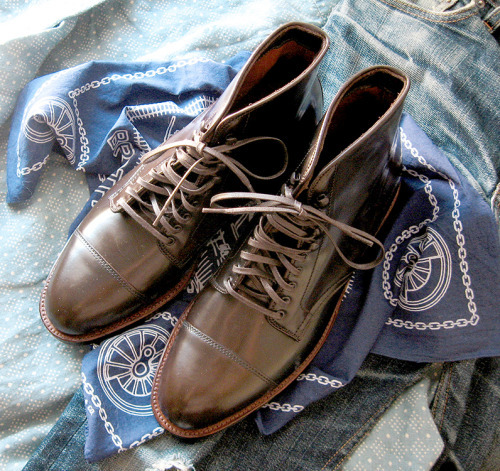 It’s been a while since menswear was obsessed with all things shell cordovan, but if you’re looking for a great a pair of shoes to get you through winter, you could hardly do better than a pair of chunky boots or derbies in this leather. Shell cordovan, as many readers know, refers to leather drawn from a horse’s rear. The word cordovan comes from the Spanish city of Cordoba, which was once renowned for its tanneries. In the 16th and 17th centuries, skilled workers would tan horsehides here, which would then be turned into wall hangings, armor, and trunks.

It wasn’t until the mid-19th century, however, that the term “cordovan” referred to the shell of horse butts (hence the name “shell cordovan”). Much of shell cordovan production at this time was done in Germany, where the leather was sold under the name “Spiegelware” (German for “mirror goods”). The name likely refers to shell cordovan’s shiny finish. Since shell doesn’t have the pores you’ll find in other full-grain leathers, it naturally gleams.

Shell cordovan today is sometimes thought of as dressy, maybe because it’s expensive, but it was once considered very a casual material. Since it’s tough, thick, and hardwearing, companies such as Wolverine originally used it for work shoes. I find it’s also perfect for winter footwear — not just because it’s incredibly protective and durable, but because the leather’s thickness gives it a chunky silhouette that sits well underneath heavy wool trousers and denim.

Some sources if you’re looking to get a pair: 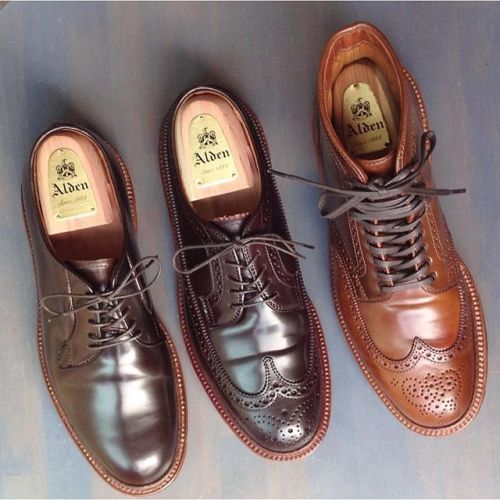 Alden: Everyone knows about Alden. They’re the most famous brand of shell cordovan shoes. What you may not know, however, is that you can sometimes get colors other than Horween’s #8 if you contact certain Alden stores (try the one in DC). They occasionally get shoes in rare shell colors, such as cigar, but you have get on a waitlist and bide your time (expect to wait up to a year). The Shoe Mart also occasionally has discounted Alden shell cordovan footwear. See this post on how to access their stock.

Allen Edmonds: The other big American name. Allen Edmonds is more affordable than Alden, although their shell cordovan often lacks the luster of other brands. Alden, for example, finishes their shell with a specific coating to enhance the colors. That said, Allen Edmonds has some really nice shell cordovan boots, which you can occasionally find on discount at their online store for factory seconds.

Meermin: Even on sale, shell cordovan shoes are dearly expensive. If you want a deal, try Meermin. They source their shell from tanneries other than Horween, which makes them a little cheaper, as well as allows them to use a wider range of colors (almost all Horween shell cordovan nowadays is in their deep burgundy #8 because the dark color helps hide any cosmetic flaws). Meermin’s shell shoes are often cheaper than what other high-end brands charge for calfskin.

Florsheim: Another great source for affordable shell cordovan shoes. You can find their wingtips on eBay pretty easily (we have a post on how to identify the good stuff). The shoes will often be pre-loved, but shell is such a hardwearing material it rarely affects durability. The only exception: occaisionally old cordovan can be a bit dry, so look closely at the photos to see if there’s cracking at the creases or stretching and cracking at the eyelets. If you’re up for second-hand shoes, try also searching for brands such as Nettleton, Barrie, Johnston & Murphy, Hanover, and Bostonian.

Crockett & Jones: One of my favorite makers for shell cordovan shoes, mostly because their lasts go so well with both tailored clothing and casualwear. They have a store in NYC, where you can shop, but their factory in England also does private label manufacturing for brands such as Brooks Brothers and Ralph Lauren. You can sometimes pick those up for a 15-25% discount during Brooks Brother’s and Ralph Lauren’s mid-season sales. I have a pair of C&J-made Brooks Brothers shell cordovan boots that I love. 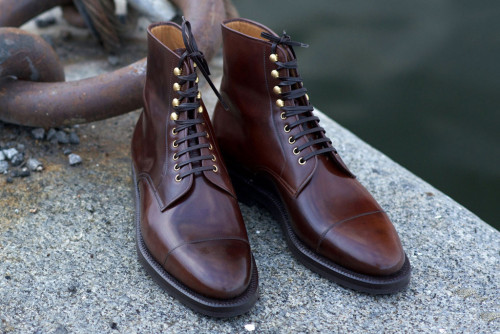 Enzo Bonafe: A better value than most. Enzo Bonafe is an Italian company with a flexible made-to-order program. They carry a wide range of shell cordovan colors, can make any design, and all their shoes are handwelted (a bit better than machine-made Goodyear welted shoes). Skoaktiebolaget occasionally organizes group orders, which helps lower the price (the above is a pair of Enzo Bonafe shell cordovan boots they once offered). They also take individual custom orders and can walk you through the options.

Vass: This company is a lot like Enzo Bonafe in many ways — they also have a flexible MTO program and handwelt all of their shoes. One of the main differences is that, being a Hungarian company, they draw more from Austro-Hungarian shoemaking traditions, which means they have more options if you prefer rounder lasts. In the US, you can custom order their shoes through No Man Walks Alone. I recommend going through a store, as shell is hard to work with and it’s good if you can get someone to guarantee a certain level of quality.

Carmina: Another great value. A little more European in styling than Alden, but not as expensive as some of their English counterparts. Carmina’s shell cordovan dress boots were once popular among guys who wear bespoke clothing, although I favor their more casual styles (e.g. the jumper boots). You can find them at The Armoury, Gentlemen’s Footwear and Skoaktiebolaget.

Edward Green: For whatever reason, Northampton companies such as Edward Green will often refer to shell cordovan as crup. Given the price of Edward Green’s regular calfskin shoes, their shell cordovan (or crup) shoes can be prohibitively expensive. That said, if you’re up for a splurge, Gentlemen’s Footwear and Leffot can get most models made on special order. I recommend going with their rounder lasts, such as their 202. The more casual style just suits the material better.

Rancourt: A small, well regarded footwear manufacturer that has produced for brands such as Ralph Lauren. They mostly specialize in American style moccasins, although they also carry a handsome line of shell cordovan boots and longwings.

Viberg: One of the most popular companies today for service boots, which is a style worn by American soldiers in the Second World War. Service boots are to workwear what boat shoes are to prep — they go with almost anything, and their versatility makes them popular with style enthusiasts. Viberg occasionally offers their service boots in shell cordovan, but they sell out within hours of going online. If you’re up for the fight, keep up with sites such as Division Road and Viberg’s own site.