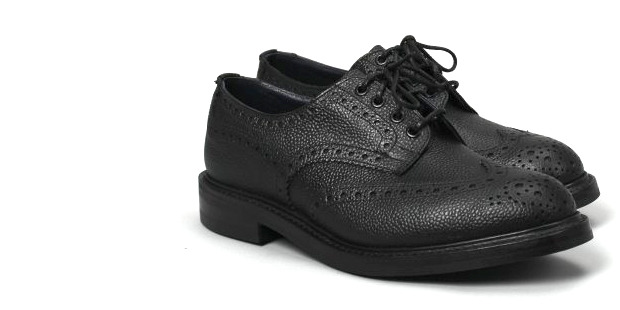 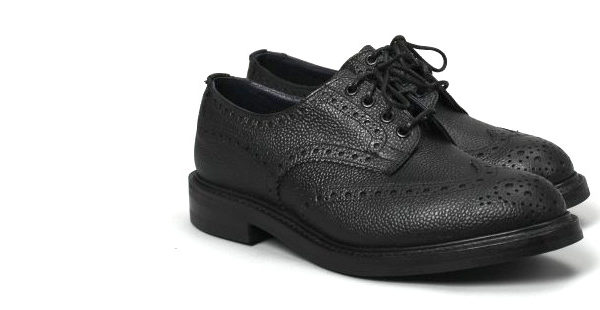 Black shoes have been tagged for years with the stigma of the duckbilled, corrected grain kicks that crawled out of the menswear dark ages of the 1990s and dominated business wear in the early 2000s. Ditching anatomically confusing and unappealingly dull shoes for the universe of brown or burgundy choices made on more traditional, rounder lasts has become a rite of passage for guys who decide to put a little thought into what they wear. But in shunning black shoes (except for formal and business formal wear), we’re missing out on one of modernity’s favorite colors.

Wearing black shoes in a nonstandard texture—scotch grain or even suede—makes sure they won’t be confused for interview shoes. The Tricker’s pictured are in black alpine grain (another word for scotch grain or pebble grain) and sit on a Dainite rubber sole. Although there’s some DNA shared with the classic American business wingtip, these are more closely related to English country shoes. The market for those old American wingtips, like vintage Florsheim Imperials, has gotten more competitive, so they’re not the value they used to be, but still a strong option. Finding a shoe with a natural midsole can ease you into blackshoes if you don’t want to go full murdered out.  On the other end of the spectrum would be something like a snaffle bit loafer, an undeservedly stigmatized shape. George Hamilton embraces their loucheness; I’d wear them with washed jeans and a small cuff.

While gray wool fabrics are maybe the most natural complement for black shoes (see Thom Browne), navy is another easy match for more formal dress, and tans, olives, and blue denim work for no-jacket-required wear, provided the cut is right (bigger shoes? bigger pant hem, generally). To state the obvious, black also goes with black (some designers and writers have made entire careers out of it), but different black tones can have varying undertones of green or red, and can in fact clash.