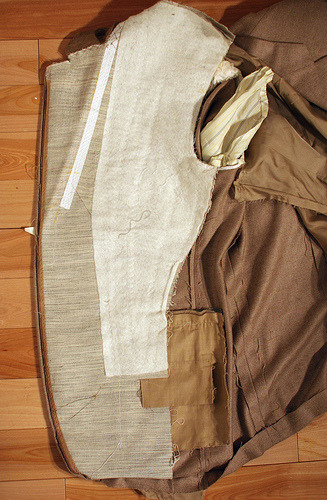 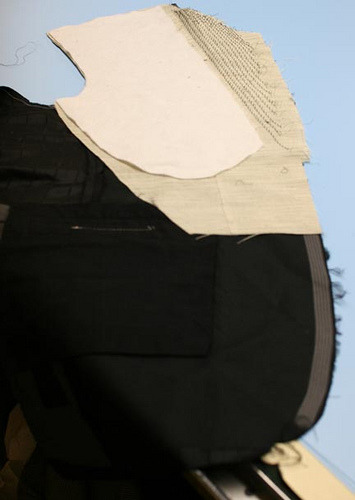 Tailor Jeffery Diduch, who maintains the rather illuminating blog Tutto Fatto a Mano, was nice enough to contact us a few weeks ago to correct us on the pinch test. Apparently, you can’t use the pinch test to see if a suit jacket or sport coat is half-canvassed, only if it’s fully-canvassed. The pinch test, as many readers know, is when you pinch the two outer layers of a jacket, typically along the lower front near the edge, and pull them apart to see if there’s a distinct, floating piece of material in between. If there is, this is said to be a mark of quality. To understand this, we should first review how suits and sport coats are made.

A Quick Primer on Suit and Sport Coat Construction

Oversimplified, a jacket is made up of distinct layers of fabric. The two outermost layers, which is the cloth we see and feel, make up the “shell.” Sandwiched in-between are layers of haircloth, canvas, felt, and fusible interlining, depending on whether the jacket is fully-canvassed, half-canvassed, or fused.

On a fully-canvassed jacket, you’ll have a canvas – typically made from a blend of wool, often cotton, and animal hair – running down the full length of the garment. Tacked onto this will be the chest piece. As the name implies, this piece is just set at the chest and shoulders, so that it gives this area some shape and support. This chest piece is usually made of haircloth, which is a cloth that has had strands of horse tail hair woven in. Horse tail hair is very stiff and wiry, which is why it’s perfect for lending structure. Add on to this some felt to cover the wiry animal hair, possibly a very lightweight fusible if the outer shell’s material needs some stabilization, and we have the basic ingredients of a full-canvassed jacket.

The upside to this kind of construction is that the canvas will give a nice bloom to the lapels, making the jacket look more three-dimensional, and give some support to the front. The downside is that this type of construction is very expensive, both in terms of the materials and labor required, and if poorly executed, it could cause the fronts to pucker.

So, about forty years ago, a German company came up with a new type of construction: fusibles. A fused jacket is much like a full-canvassed garment in that it still has the two outer shell layers, a chest piece, and some felt. Replacing the floating canvas, however, is a fusible interlining. When heated and pressed, this interlining’s special resin will melt and bond to any cloth, thus adding a similar kind of support that canvas does. The upside to this is that we cut costs. It’s quick, easy, and requires little to no skill on the part of the operator. The downside, as you can imagine, is that it slightly stiffens the cloth and doesn’t provide as nice of a support as animal hair. Lapels don’t “bloom” in the same way, but rather look flat and lifeless. It also used to be the case that fused garments carried a risk of delamination and bubbling over time, but the technology has come far enough where such cases are rare.

Finally, we have half-canvassed garments, which are the compromise. Here, the front of the jacket is fused (since you still need to stabilize the fronts), but the fusible doesn’t extend to the lapel area, where you want that kind of bloom and structure that animal hair gives. Instead, the lapels will have canvas in it like a full-canvas garment. Here, you try to get the benefits of both methods, while minimizing the cons.

The Limits of the Pinch Test

Now, the pinch test is said to be a way for you to tell if a jacket is canvassed or not. Usually, you’ll want to take the fabric a few inches below the lowest button, pinch the two outer layers and pull them apart. If you can feel a distinct, floating layer in-between, that’s the canvas. You know so because below the lowest button, there’s really nothing but the two shell layers and whatever has been used to stabilize the fronts. If it’s floating and distinct, then you’ll know it’s been fully-canvassed. If you can’t feel anything between, that means some fusible has been glued onto one of the shell layers.

* Thanks to Jeffery for his help with this article. For a more detailed write-up on how suits and sport coats are made, read Jeffery’s post here.