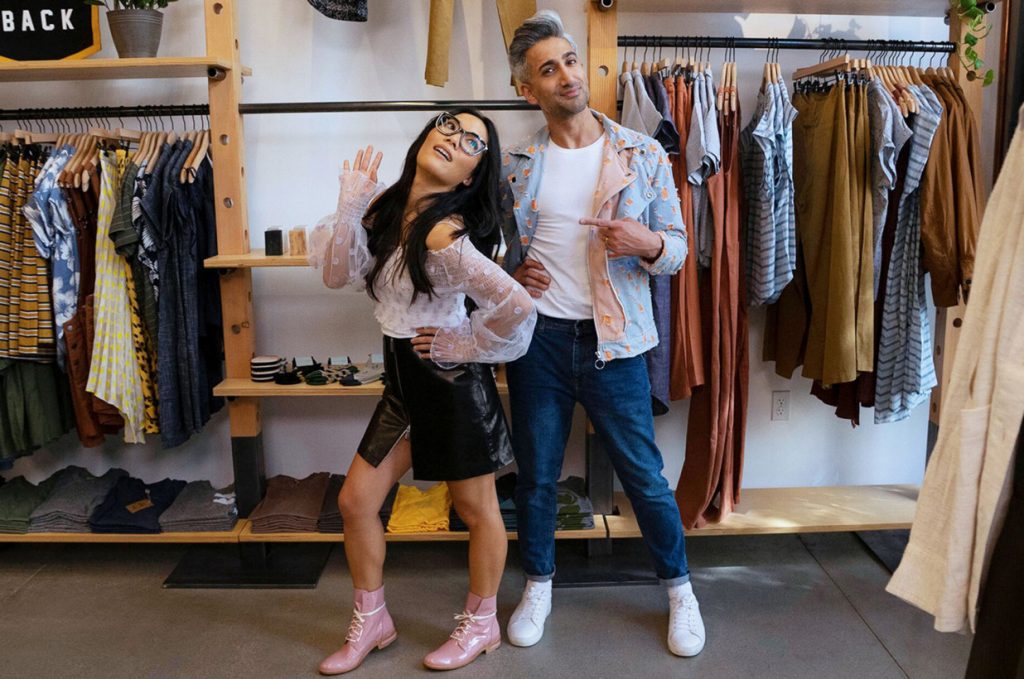 In the second episode of Dressing Funny, a new comedy webseries on Netflix, Tan France gives Big Mouth co-creators Nick Kroll and Andrew Goldberg a wardrobe overhaul. The trio meets at Fred Segal, a leading fashion boutique in West Hollywood. Kroll and Goldberg show up in dumpy hoodies and pre-washed jeans — the uniform of comedians — and follow France’s direction for how they can develop a better sense of style. To be sure, it’s not clear if Kroll actually needs the advice (I’ve definitely seen him in some good outfits), but Goldberg admits that he’s lost when it comes to clothes. “I have two young kids, and there’s a puppy, and there are lunches,” he says. “I grab the thing that’s on top.”

France lets the pair loose in the store with their first challenge: to dress each other in an outfit they think is fitting. Goldberg makes an earnest attempt to dress his friend stylishly (although he doesn’t quite get it right). Kroll, on the other hand, decides to pull together something ridiculous. After passing on polyester track jackets and psychedelic vacation shirts, he lands on an outfit consisting of a fitted sport coat, patterned swim trunks, and buckle-strap sneakers. Upon seeing Goldberg emerge from the fitting room, Kroll jokes: “You look like a sexy schoolboy.” Goldberg would later get the last laugh, however. So far in the show, he’s had the biggest style transformation, moving from what Kroll described as a “depression outfit” to something that could have once been featured in the Japanese mag Free & Easy.

Each episode of Dressing Funny follows this same formula: France dresses his guest in slightly ridiculous outfits until they emerge in something amazing, and along the way, he talks with them about their relationship with clothes. Comedic guests include Tina Fey, Ali Wong, Pete Davidson, and others. And while the show is mostly just for laughs, it also highlights some of the challenges of building a casual wardrobe. Every episode takes place inside an upscale fashion boutique — the kind where you always notice something is off when you enter. The air somehow smells a little fresher; the clothes are set a little further apart from each other on the racks. Once you see the prices are handwritten on artisanal paper, you realize you’ve wandered into all all-too-expensive store. 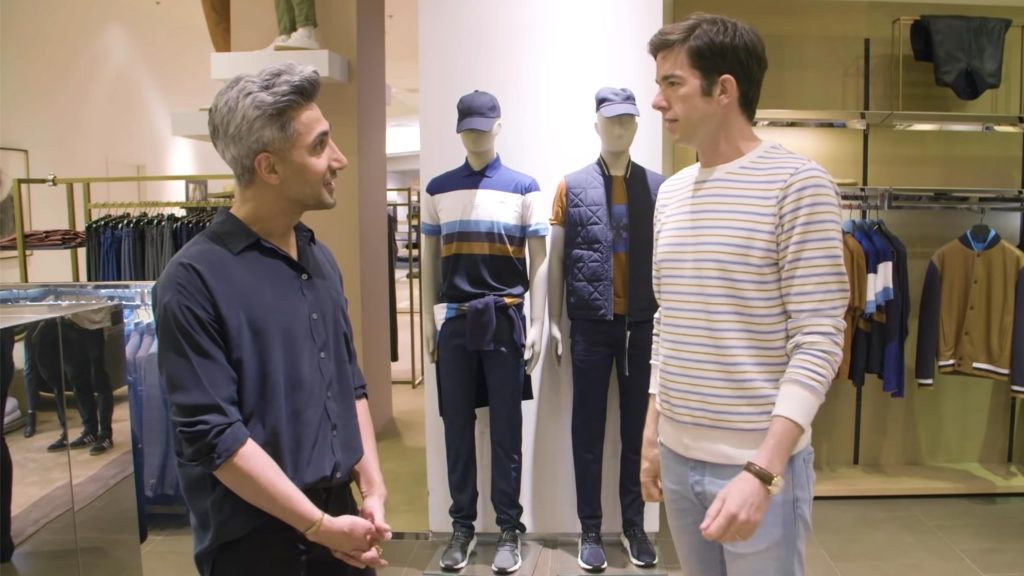 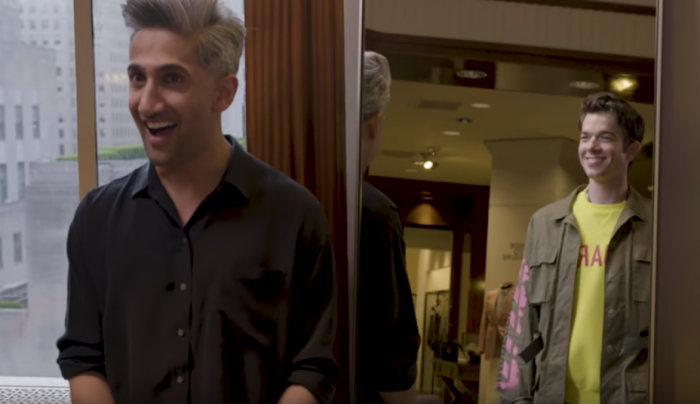 For guys who aren’t used to shopping in such spaces, this kind of environment can be intimidating (to be sure, I still find them intimidating). The prices are astronomical, and you always feel like you’re not supposed to touch anything, let alone try things on. Then there are the styles — three-legged pants, deep-pile fleece socks, and doleful, patchwork Franken-jackets with narrow shoulders. In the first episode of Dressing Funny, France dresses John Mulaney in a high-fashion streetwear outfit that involves a sleeve-printed field jacket, luxury track pants, and Balenciaga Triple S sneakers. Mulaney, rightfully, says he looks like an undercover teenager trying to buy drugs.

These are the sorts of designer outfits that make many men — particularly older men — feel like they can’t dress nowadays without any sense of dignity. Every trend seems more ridiculous than the last, especially now that fashion is governed by notions of camp, irony, and insider-humor. Combine this with the prices, and it’s easy to wonder if fashion is just a prank on unknowing victims.

To be sure, it’s possible to wear these things well, but doing so requires a few things. It helps to live in a big city and and work in one of the creative industries. You also have to be willing to stand out a little from your peers, as well as follow fashion somewhat closely. All style, including the traditional coat-and-tie, is about learning a visual language. The main difference is that, while everyone understands the language of suits — it’s the uniform of “respectability” — there are a million tribes in casualwear, each with their own language, which can make it difficult to understand something if you’re not already acquainted with a look.

The death of traditional dress codes has, ironically, made it more difficult to dress well. A hundred years ago, men dressed according to time, place, and location. Brown suits were for the country; navy suits for the city. Black oxfords were for business; brown brogues were for sport. As dress codes became less constrictive, creativity has bloomed. During the pre-war era, earlier forms of ready-to-wear clothing were little more than watered-down imitations of their better custom-tailored counterparts. But in the last seventy-five years, the fashion has exploded with energy and imagination, especially as production has been reorganized to include specialized designers, improved technologies, and global supply chains.

We’ve reached an age where there’s a full kaleidoscope of possibilities in terms of appearance, and the ascendancy of one look doesn’t necessarily displace another. Modern minimalism (Uniqlo) and maximalism (Gucci) are both considered legitimate, as are soft Italian tailoring (Sartoria Formosa) and ironic normcore (Balenciaga), conceptual deconstructionism (Margiela) and rugged workwear (RRL), futuristic techwear (Acronym) and folk clothes (Kapital), the bohemian hippie look (Visvim) and new internationalism (18 East), Japanese avant-garde (Yohji Yamamoto) and prep (Ralph Lauren), vivid colors (Kenzo) and dusty earth tones (Stoffa). You can layer the high and low; wear slim-fitting clothes or wide-fitting garments. As Gilles Lipovetsky writes in The Empire of Fashion: Dressing Modern Democracy: “Nothing is taboo any longer; all styles are accepted and exploited unsystematically. There is no longer a fashion, there are fashions.” 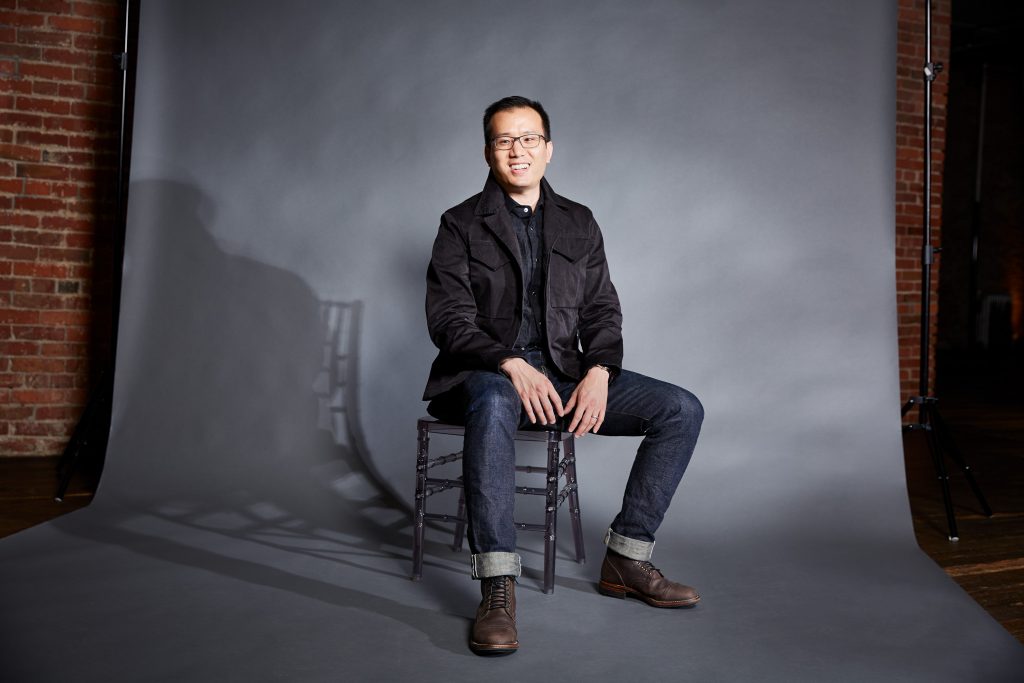 (photos: an outfit from Division Road and Goldberg on Dressing Funny)

It’s no wonder why so many men find casualwear exhausting and confusing. In each of the Dressing Funny episodes, Frances puts his guests in a very on-trend outfit. Kroll wears a Kanye-esque sweat suit, Mulaney sports a Hedi rocker uniform, and even Goldberg’s sport-coat-with-swim-trunks outfit could pass for an Engineered Garments look. And yet, while these outfits look great on some men, they look absurd here. One of the great things about classic men’s style is that, relatively speaking, you don’t have to contort your personality as much to fit your wardrobe. The downside? Without a tailored jacket, classic casualwear tends to look bland and boring. (Preppy readers will protest and say everyone looks good in OCBDs and khakis, but while that’s true to some degree, those outfits lack something. Just see how terrible the business casual movement has been for modern wardrobes).

Dressing Funny leaves us with some hope. There are three episodes so far featuring men. The one of Pete Davidson ends with the SNL comedian wearing a 2010 GQ outfit. France puts Davidson in a closed, slim-fit trucker jacket, over which he layers an equally slim fitting topcoat. It looks a little forced and, to be honest, I prefer Davidson’s usual attire (which former Esquire editor Jay Fielden once described “intentionally ugly streetwear”). The two best transformations, however, have been Andrew Goldberg and John Mulaney, both of whom ends up with something vaguely Americana and workwear-ish. Mulany gets out of a ho-hum striped sweater and puts on a mauve t-shirt, tan suede jacket, and some black Chelsea boots — not strictly workwear, but a distant cousin. Goldberg, on the other hand, goes the whole nine-yards with a waxed rancher’s jacket, black slim-fit jeans, and oiled suede work boots.

The great thing about Americana and workwear is that they’re geographically neutral. They work just as well in New York City as they do in the mid-west. They work for almost any guy of any age. Like suits, they point back to a language that many people understand. The style is dense with traditional masculine references that are common throughout modern culture, including film, books, and music. You don’t have to learn a new visual language, unlike with very trendy or avant-garde wardrobes. And yet, unlike American prep or Italian casualwear, the style is more directional, pushing it away from just dad-wear or bizcaz. Will it work for everyone? No, but nothing will.

If you’re just starting to build a casual wardrobe, start with a good pair of slim-straight, raw denim jeans (I like 3sixteen’s SL-100x as a do-all cut, but a lot depends on your preferences and build). Jeans are the foundation of many casualwear styles, and will prove useful even if you later decide to move on from Americana and workwear. Then get a sturdy, grey cotton sweatshirt for layering, some plaid flannel shirts and light-blue oxford button downs, and a pair of work boots. For outerwear, consider olive field jackets, waxed cotton Barbours, and maybe a leather bomber or cafe racer if you’re up for a splurge. I also really like the stuff Goldberg is wearing in Dressing Funny: black jeans are a little more directional than blue, and a tan rancher jacket will go with black or blue denim. I often wear one from RRL, although the model is from an older season. Finally, check out our two-part guide on casualwear for more suggestions.