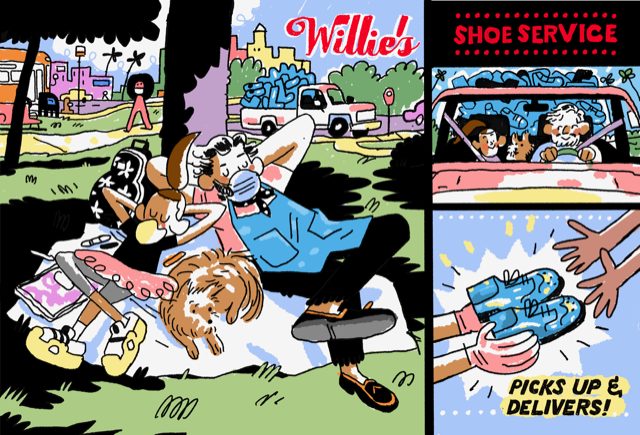 About seven years ago, I started sending all my shoe repair jobs down to Willie’s Shoe Service after having a frustrating experience with a local cobbler (they promised to fix the heel, but ended up ruining the leather in the process). Willie’s Shoe Service is based in Los Angeles, which is a good eight-hour drive from where I live. That’s too far for me to visit in person. I was a bit skeptical at first of whether Raul Ojeda, the proprietor, could do a good repair job remotely. But after a totally smooth and successful first order, I’ve been sending everything down to him ever since.

Ojeda is in a unique position when it comes to the shoe world. He took over Willie’s Shoe Service some years ago from the shop’s founder, Willebaldo “Willie” Rivera, who opened his business in 1956 across from Paramount Pictures on Melrose Avenue. The original Willie was known for producing made-to-order shoes for the film and TV industry. He made the leather sandals that Charlton Heston wore in the 1956 film The Ten Commandments, as well as all of the boots that the Starship Enterprise crew wore in the 1979 movie Star Trek: The Motion Picture. Ojeda apprenticed under him for three years before purchasing the business in 2007.

Today, Ojeda runs two businesses. There’s the shoe repair shoe, Willie’s Shoe Service, and then a totally bespoke operation he calls Don Ville. Being that he both repairs and makes shoes, he can solve just about any problem. I once bought a pair of Oak Street Bootmakers boots and found the insole strangely slippery, so I had Raul replace them. Our illustrator Ryan once found that the back seam on his Carminas had burst open and had them repaired here. Willie’s Shoe Service can add sole protectors, change sock liners, and fully resole shoes. He even resoles sneakers.

Unfortunately, Willie’s Shoe Service has been hard hit by the pandemic. If you’re in the Los Angeles area, the good news is that they have a new pick-up and drop-off service (meaning, they come to you). If you’re a little further outside the Westside or downtown, they also have a curbside service. And if you’re a bit further out still, like me, then they have a full mail-in service complete with print labels.

We’ve talked a lot about the importance of supporting small businesses at this time. A countless number of small shops around the country have already closed, but they don’t capture headlines like Brooks Brothers or J. Crew filing for Chapter 11 bankruptcy simply because they’re more about local news (Curbed recently did a send-off to 500 small businesses that have closed this year in New York City alone). But this story is doubly true for craft-based businesses, including tailors and cobblers. These are people who have trained for decades. Should they be forced to find new jobs, it would be a tremendous loss to this industry, our communities, and these crafts.

If you happen to have a pair of shoes sitting in your closet that’s in dire need of some repair, consider sending them to Willie’s Shoe Service. Raul genuinely does an amazing job and really knows his stuff (just check out this shoe breakdown he did for us five years ago). You can also see examples of his work on Instagram.