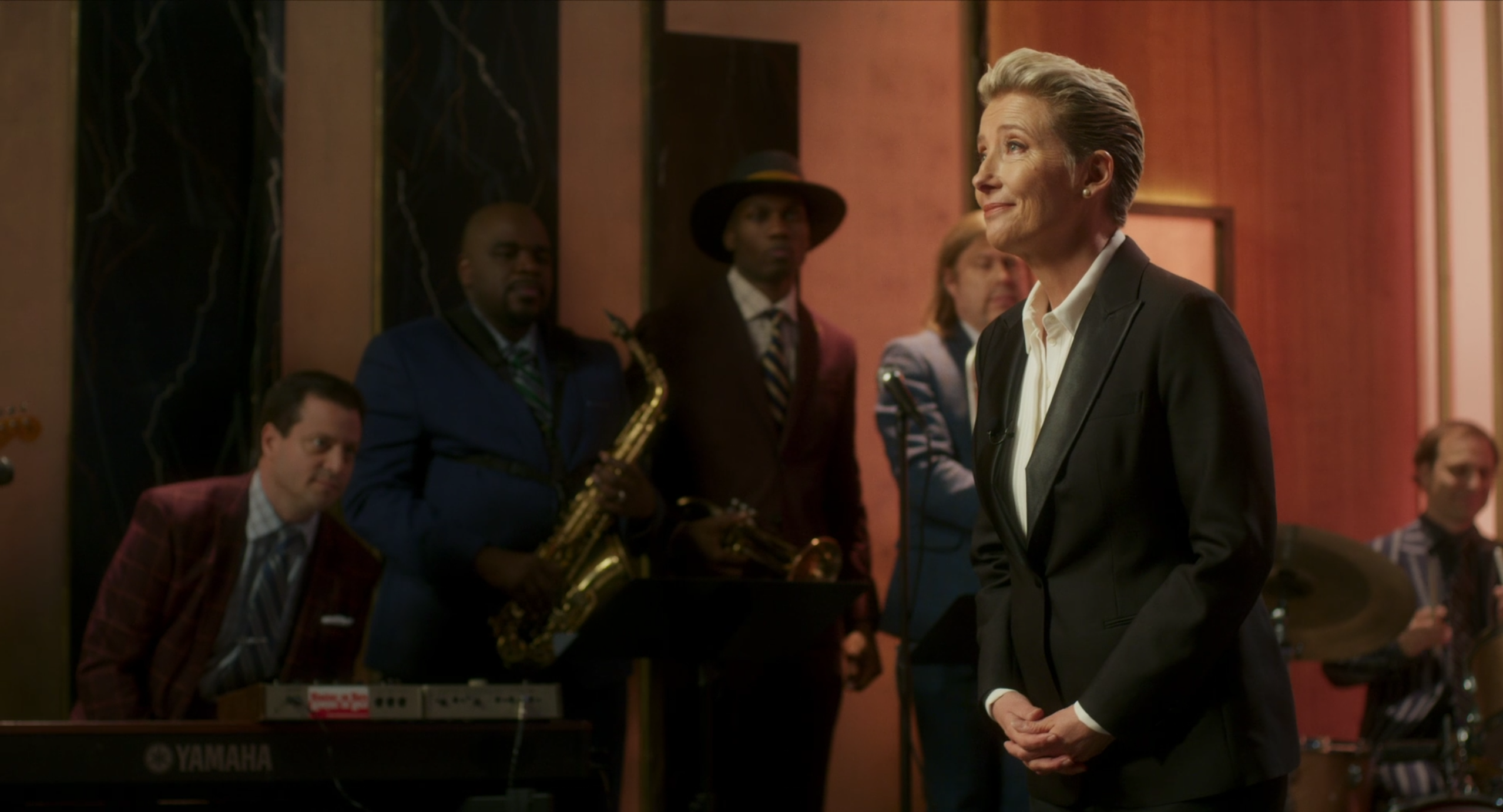 When it comes to style inspiration in film, we often look to older movies or stories set in the past, which can cherry-pick vintage fashion or recreate it in a way that increases its relevance today. We champion old Jack Nicholson movies (or later Jack Nicholson movies), the French Connection, or recent work set decades ago, like AMC/BBC’s Little Drummer Girl, Wall Street, or the Wolf thereof.

So I had no particular expectations for men’s wardrobe inspiration going into watching Late Night. Also, it’s not about men? It’s the story of a network late night talk show host, Katherine Newbury (Emma Thompson) who’s threatened with cancellation after a years-long slide into irrelevance, fueled by what she perceives as sticking to her standards but is closer to resting on her laurels.

Newbury tries to sharpen her show by spending time with her writers, with whom she otherwise minimizes personal interaction. Their pitches are stale and they’re handcuffed by what Katherine won’t do–she doesn’t want to be political, and doesn’t want to leave the studio, where she’s in control. The writers are all white men, except for recent “diversity hire” Molly (Mindy Kaling), a dedicated Newbury fan who talks her way into a writing job following a career in quality control at a chemical plant.

I guess it’s a spoiler to say that, despite some drama, things work out–Newbury rediscovers her voice with the help of Molly; fends off a challenge from an up-and-coming, misogynist comedian; and navigates a sex scandal, keeping her show and adding more new perspectives to the writer’s room.

Throughout, Newbury wears some pretty rad tailoring. The film’s costume designer, Mitchell Travers, researched the wardrobes of current late night hosts (all male) as well as groundbreaking woman comedians like Joan Rivers (who briefly had a network late night show in the 80s) and Ellen DeGeneres. The result is that Newbury wears 17 suits in the film. 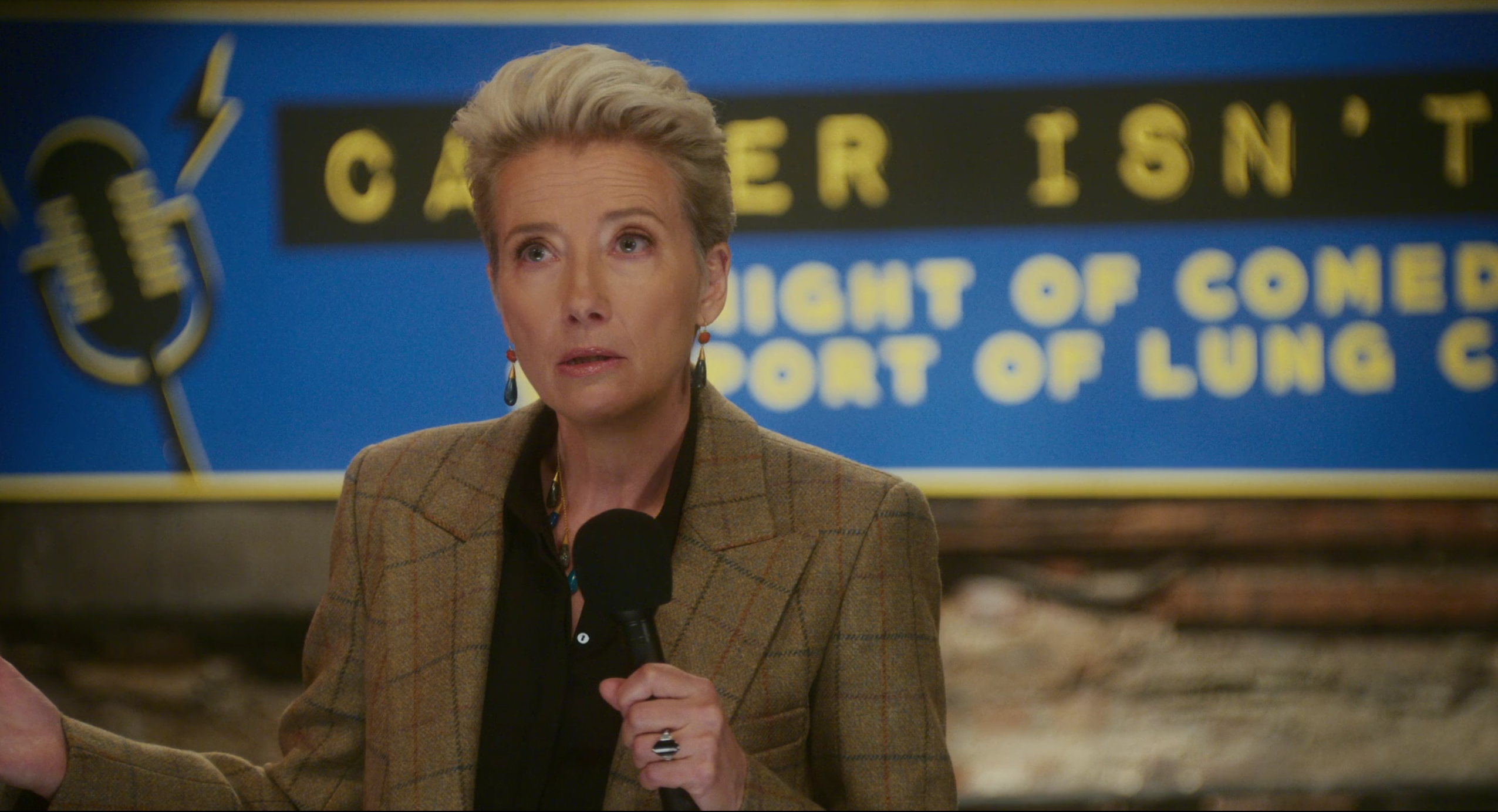 Travers told Fashionista, “I was so inspired by [Rivers] in general as a trailblazer. I just felt like it was the look we needed in the movie in order to feel like [Katherine] would be coming up through the ranks the same time as Joan.” He also spoke to Vox:

We still have no real reference for a female late-night host on network television. So there is freedom in that you get to decide what that looks like, but it’s also a little frightening. In Late Night, this woman kind of has a chip on her shoulder, has a lot to prove, and is being made to jump through hoops that she only has to jump through because she is a woman. I think, in her comedic way, but also as a little bit of an f- you, she would turn menswear on its head and challenge the men. 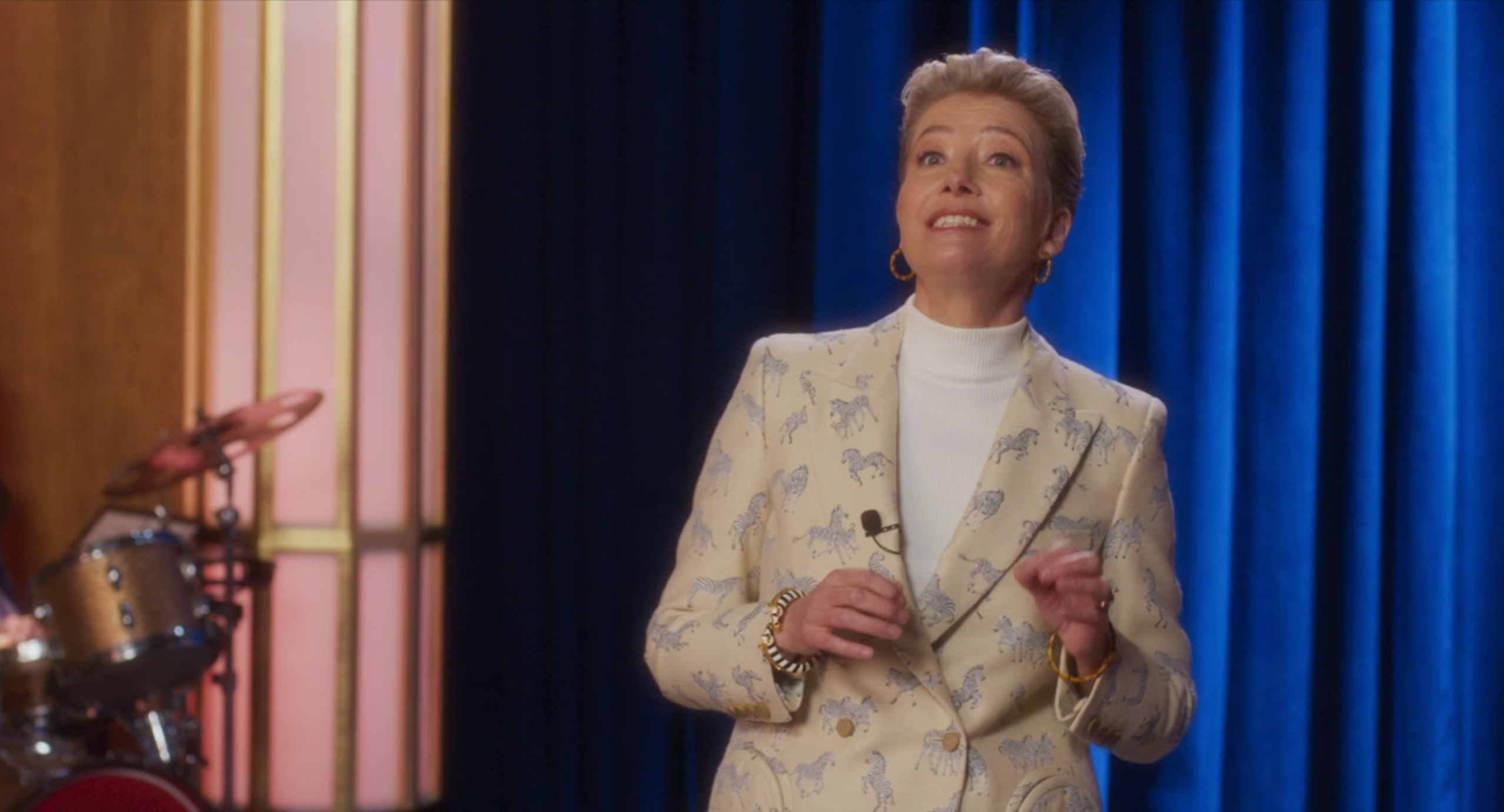 Although the cuts vary a great deal, with some short and close to the body and others larger with sharper angles, I expected the suits might be custom or even bespoke. In fact some came from Stella McCartney, some Prada, some Armani, and some from Suistudio, a women’s line from the same company as Suit Supply. The wardrobe was sequenced to demonstrate Newbury getting her confidence back, generally being more conservative at the start of the film and getting louder later in the plot. She wears the tux on an episode where she apologizes to her audience, to mark the seriousness of the occasion.

To contrast with Newbury, her male writers (including Hugh Dancy and Reid Scott) are mostly dressed in bland workplace standards: khakis and graph check shirts; a dark or muddy shades.  They’re not villains, just not dressed to stand out on screen the way Newbury does. (Dancy does get to wear a pretty sweet leather jacket.) 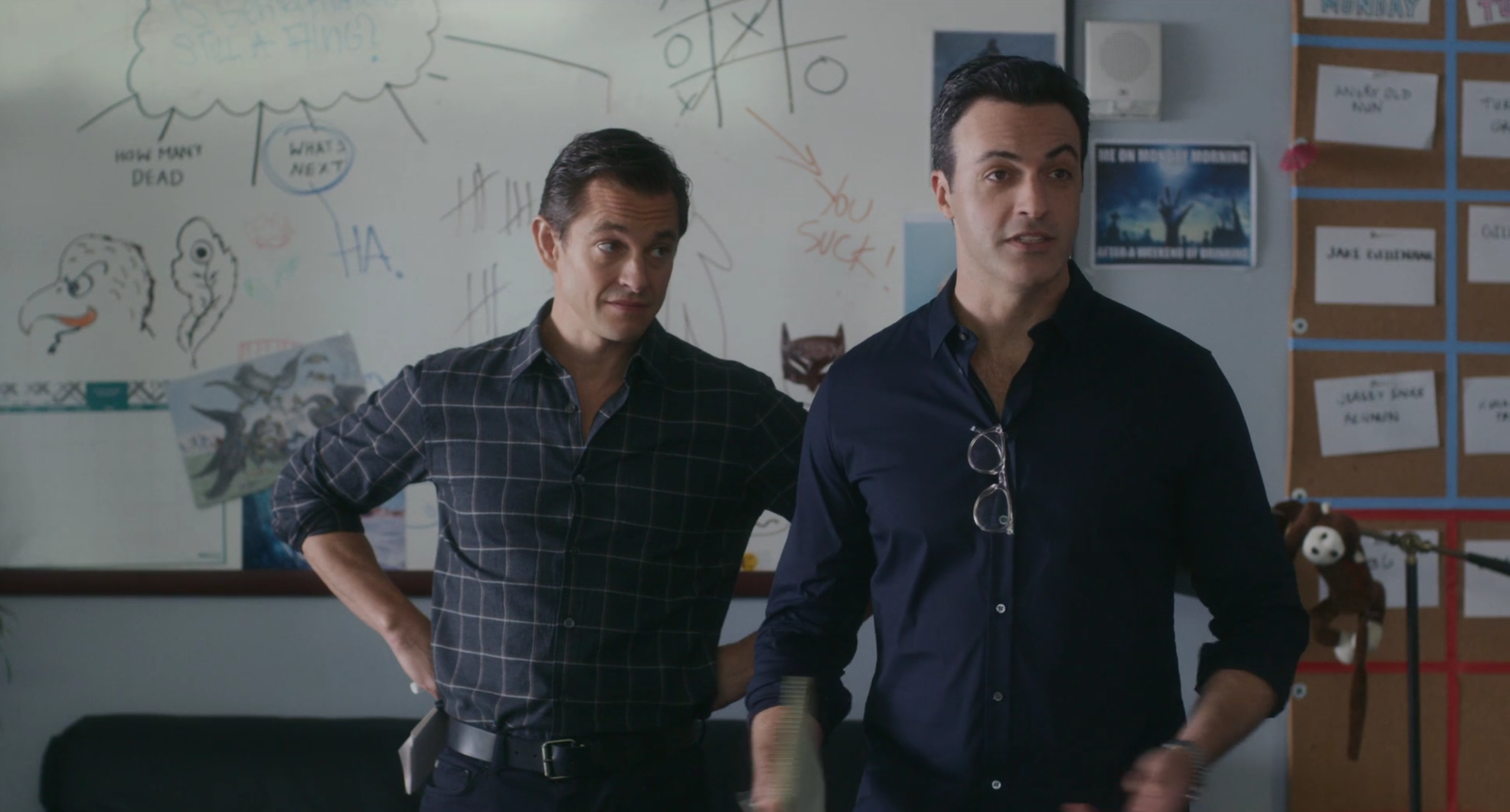 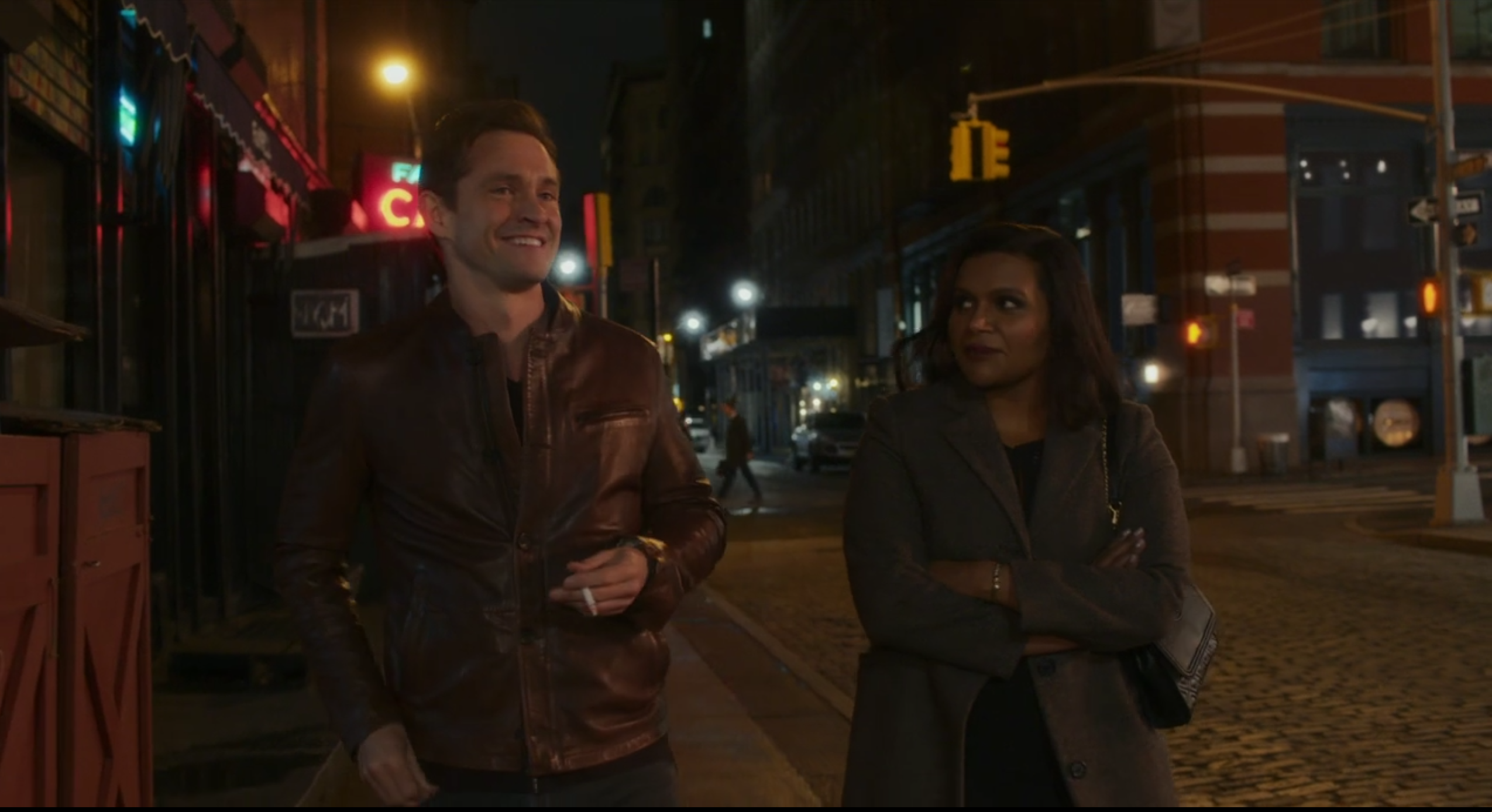 Coming off a summer where, to be honest, I wore tailored jackets nearly only when occasions absolutely demanded it, I appreciated watching in Late Night a character for whom tailoring was clearly a choice, and one she enjoyed. 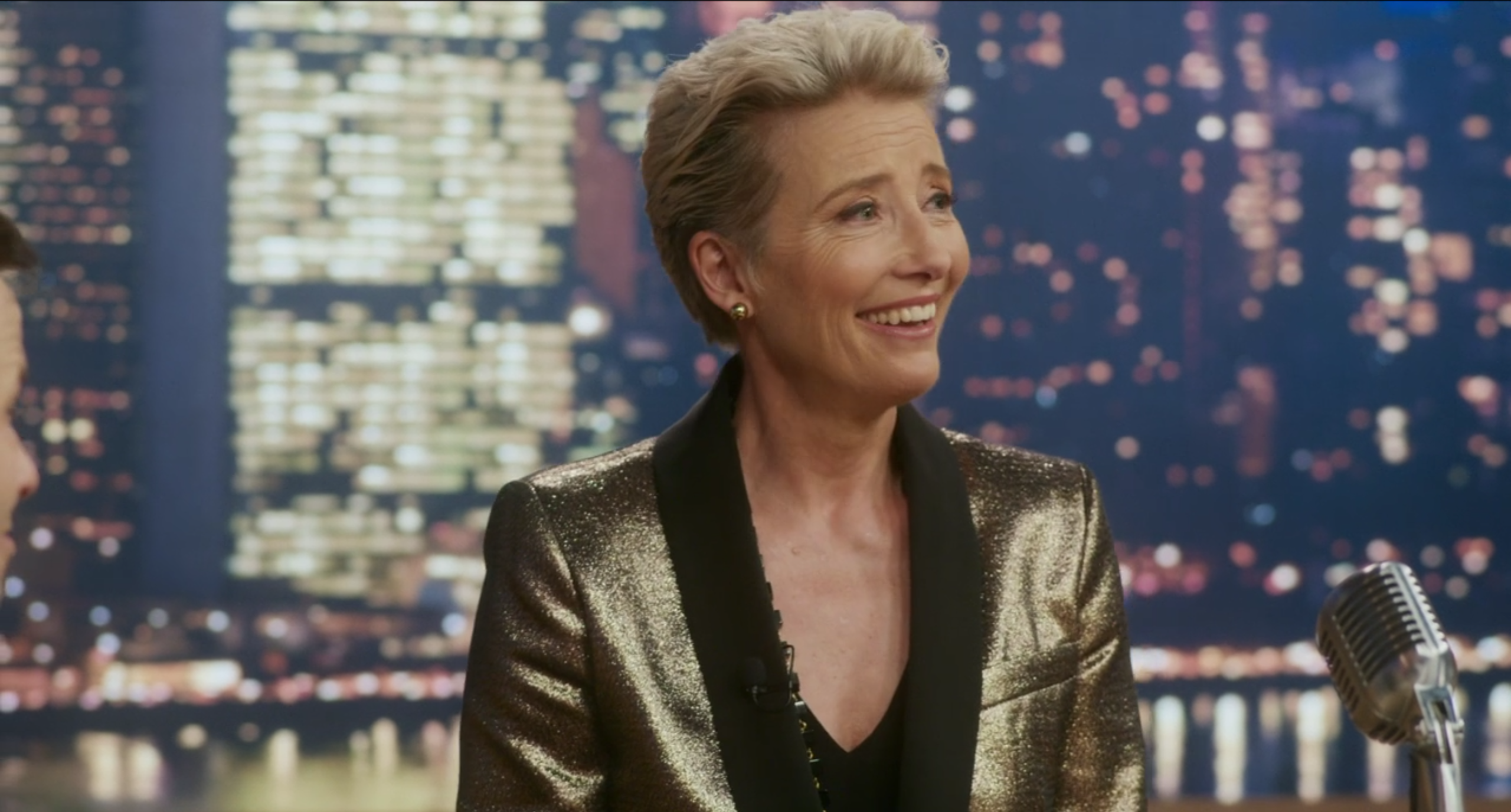 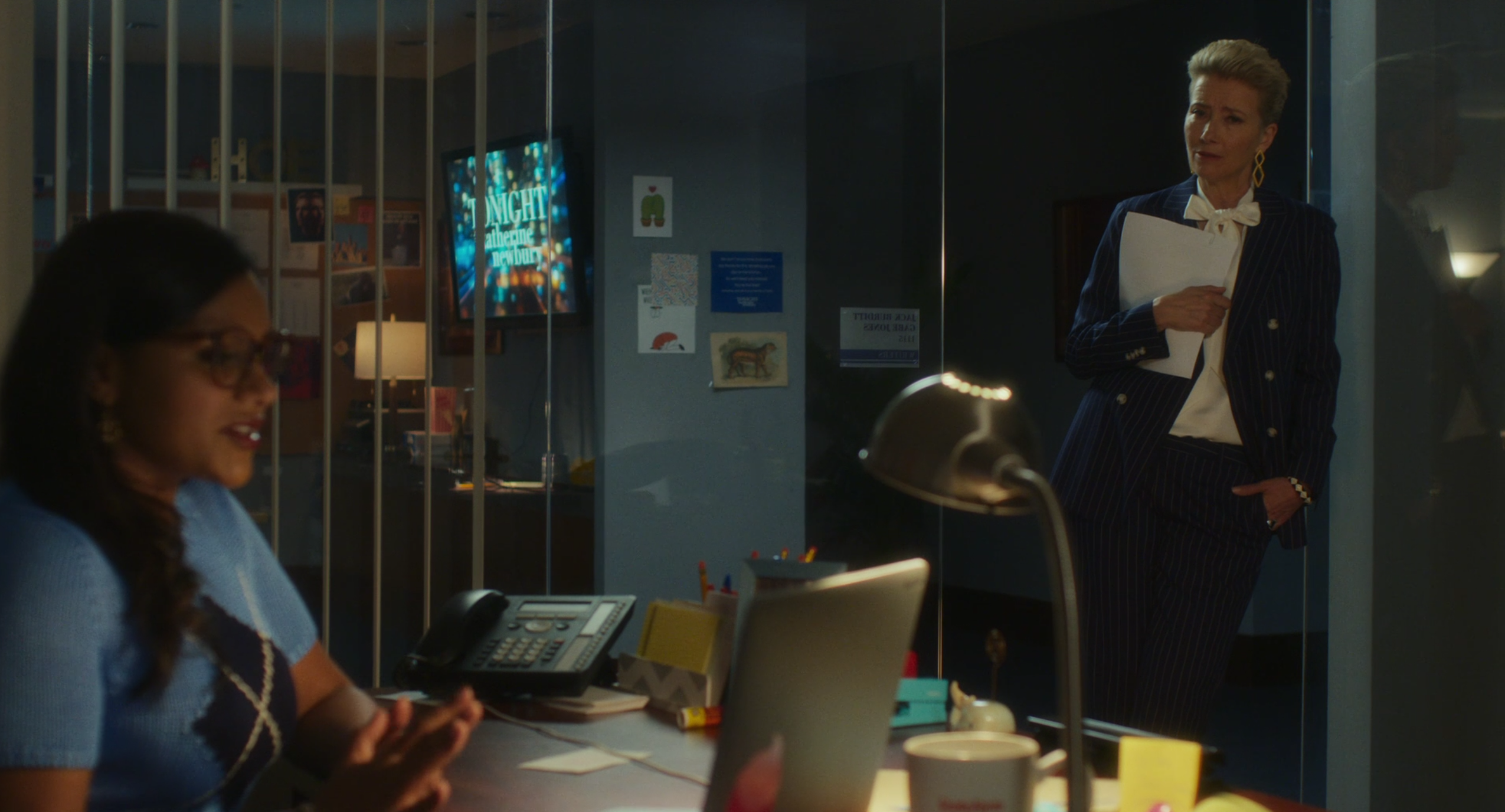 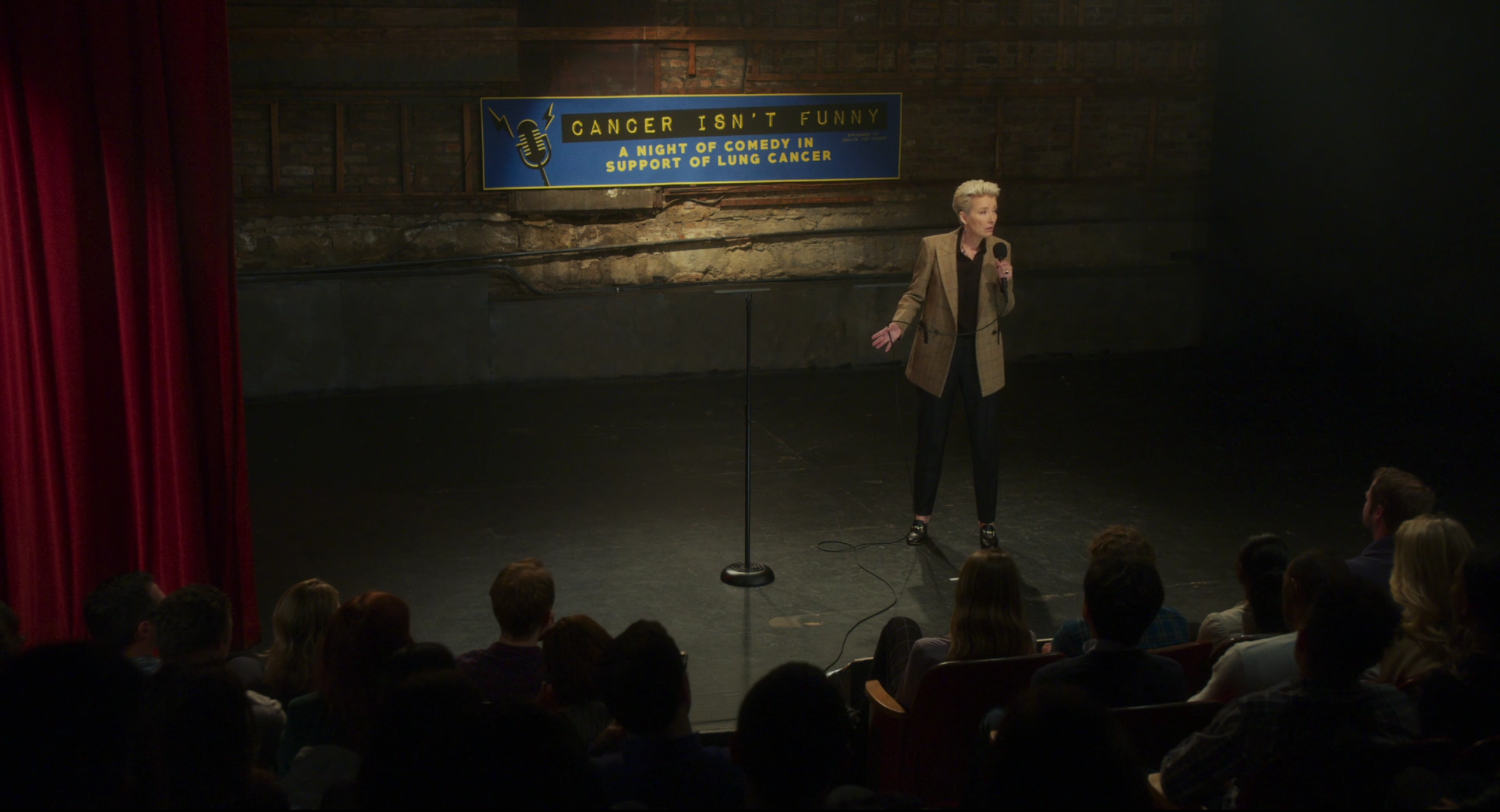 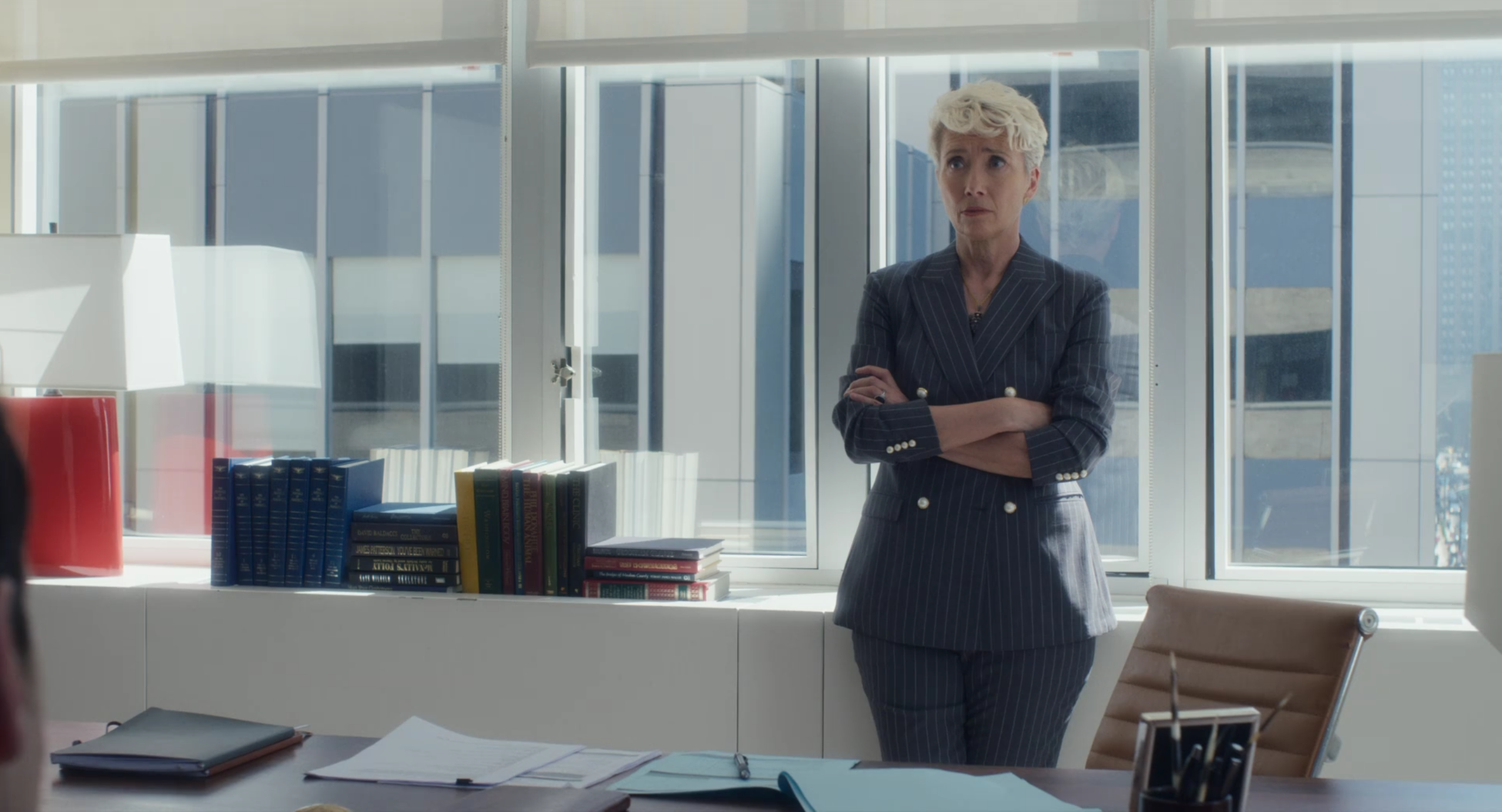 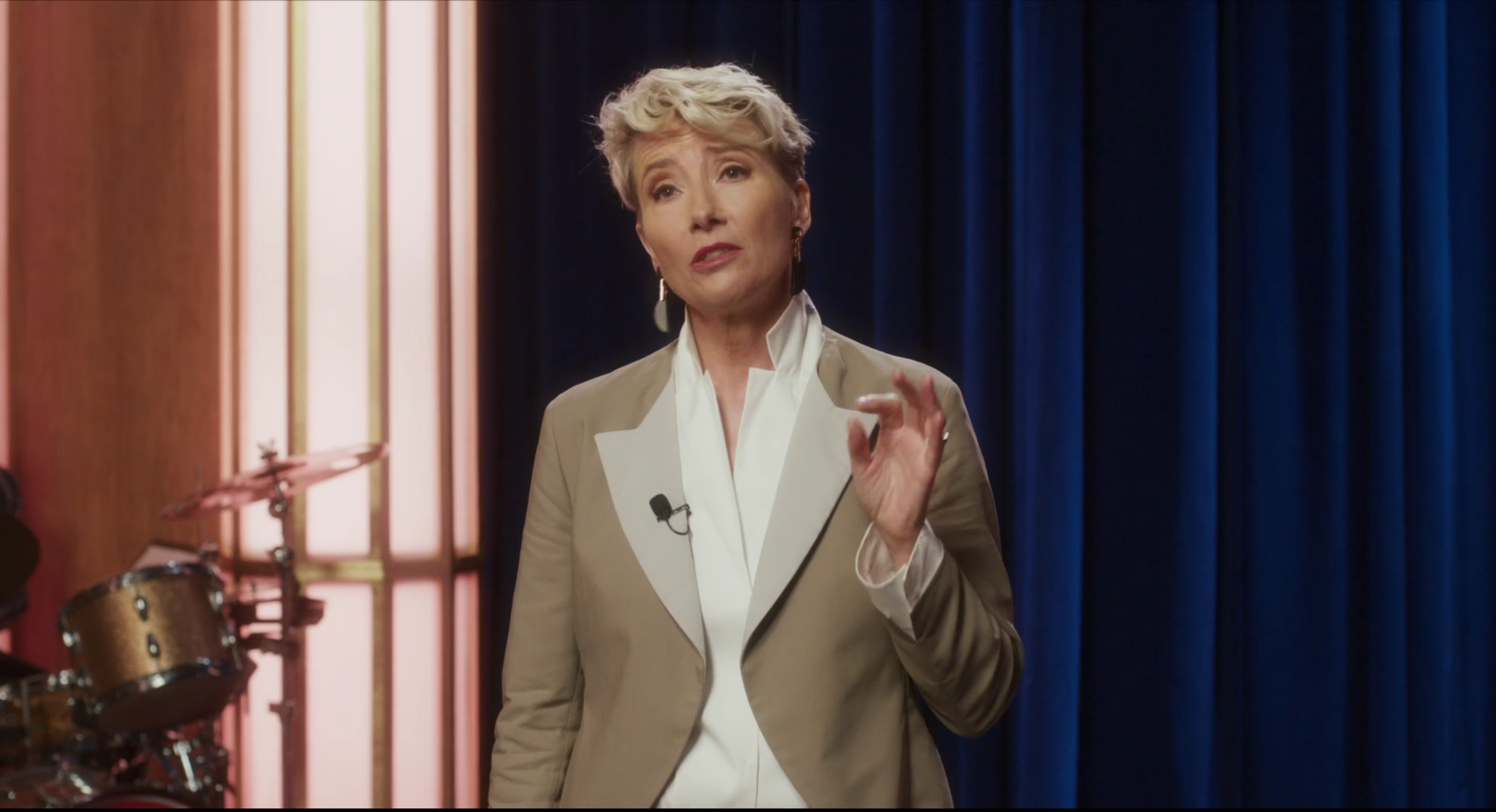 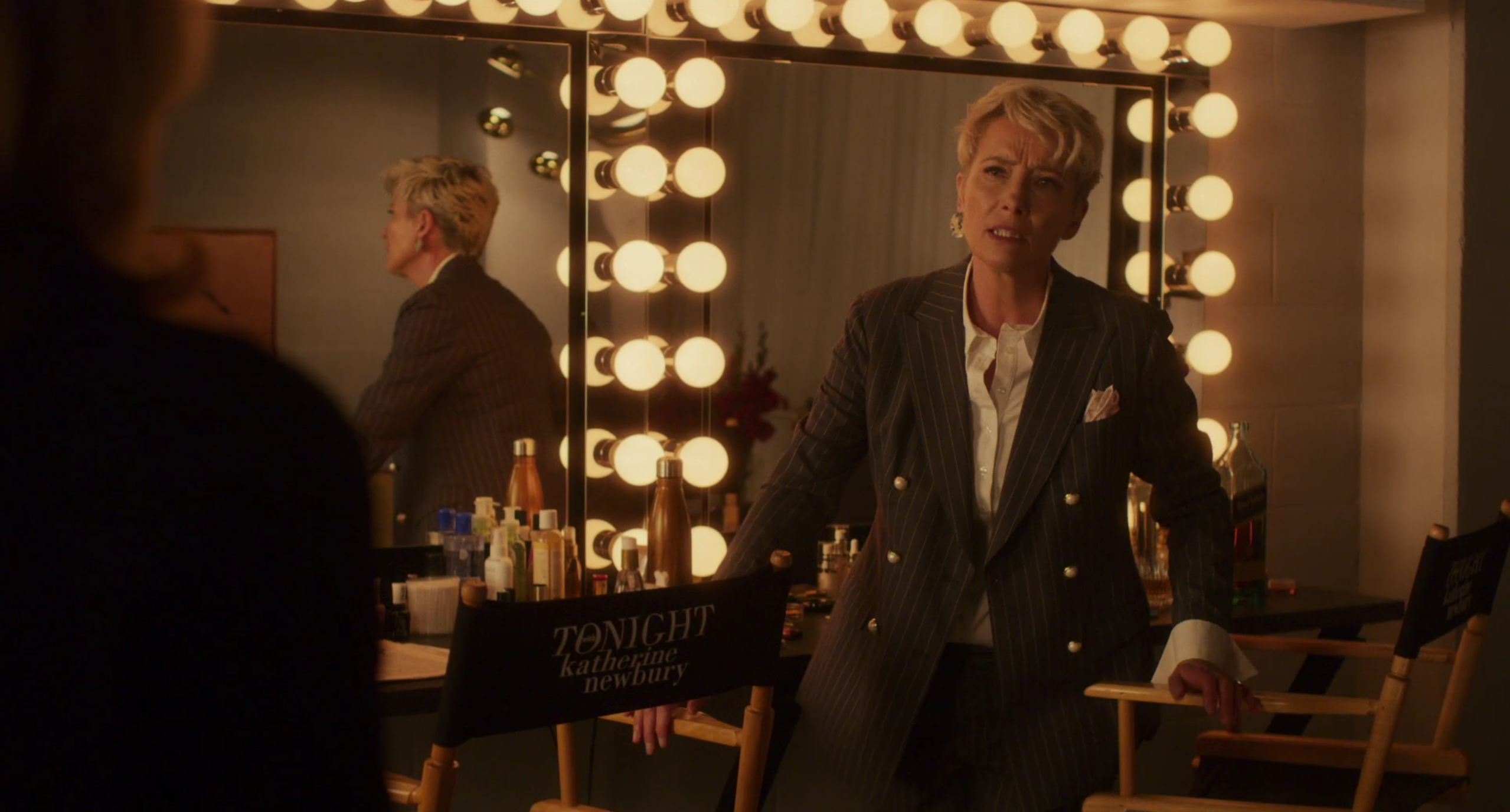